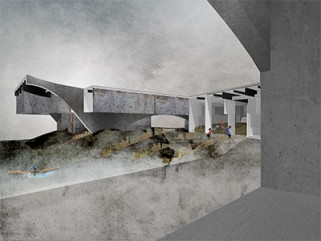 Our concept addresses the way and the rate at which materials erode over time due to the increase in sea level rise. As the land erodes, Corten steel becomes exposed indicating a measure of time. These steel strips are embedded in the ground at a ten foot structural bay increment that either embraces or directs the rising sea level on our site in East Boston. Three cisterns are placed in relation to the current and projected high tides and are used as generators for energy and a spectacle as the surrounding landscape is built up around them.

The strips hold the shape of the built up land as the rising sea level eats away at various soil types, from sandy soils at the shoreline to clay inland. The building is made up of what appears to be three buildings on the first floor that are connected on the second floor. Each entrance opens up to a larger program that relates to the context. The form is derived from the metal strips that organize the building from landscape to roof. In two instances, the primary beams separate the building into sacrificial zones that allow the building to completely open up during pleasant weather; the cafe and the aerial yoga studio. The circulation on the first floor is jagged, allowing for pockets of retreat from the larger spaces for disaster relief. The second floor circulation is a more clearly defined directive towards the main program, an auditorium for the storm water ‘ritual.’ 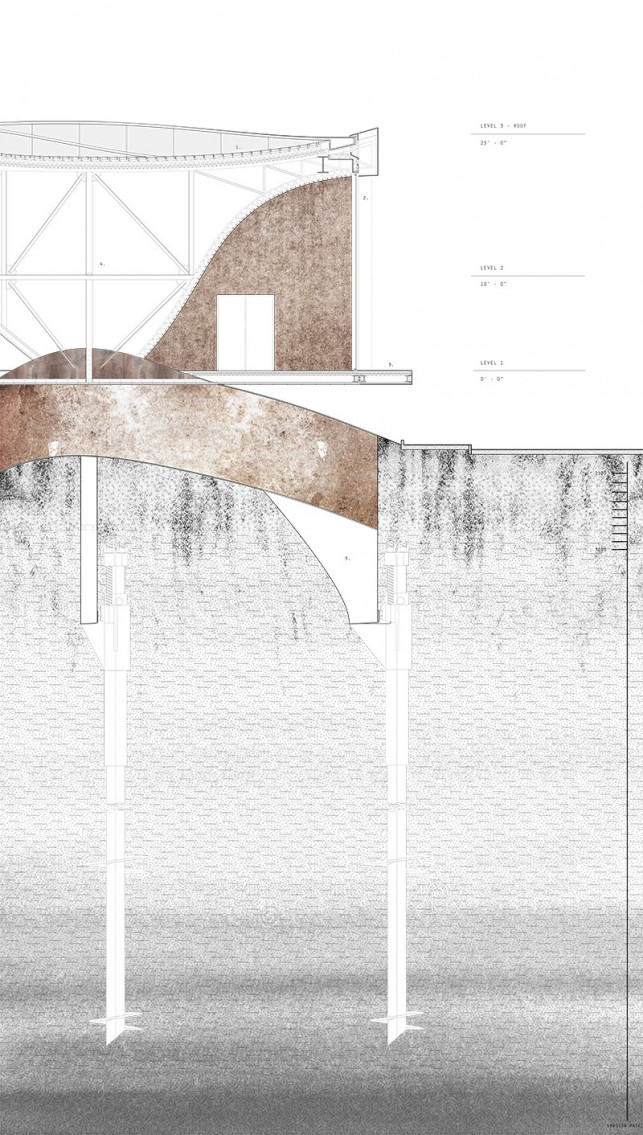 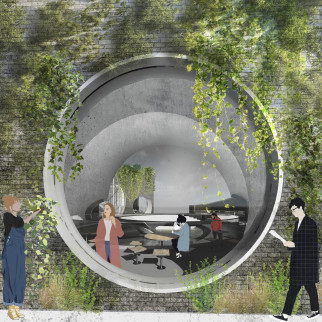 Learning Through Temporality and Landscape is located along the East Boston Harbor in Massachusetts. The project aims to become a learning center and shelter to a community where the most vulnerable members of the community are directly affected by sea level rise. Designing for resiliency in the future, the terracing landscape is based on sea level rise projections, monumentalizing the ever-changing waterfront condition. We have seven landscape terraces which are elevational thresholds for sea-level rise every 20 years. A single user’s experience of the site changes every day, every season as well as over the course of a lifetime. 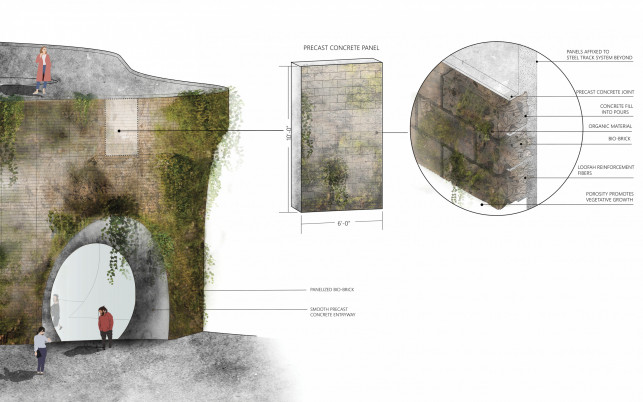 The playful moves of pocketing space in the landscape is transformed into three dimensional volumetric play, encapsulating large interior spherical volumes. The scale and location of the volumes represents hierarchy in the program. The program is comprised of the continuous learning landscape, education center, flexible market space, rooftop community garden, public auditorium and amphitheater, as well as badminton court and flexible ambiguous play spaces, which all convert to a disaster relief center. Resiliency was also used in the design of our mechanical systems by dividing up the project into three zones. The most protected (highest elevation) and important program areas have the highest elevation mechanical zones to consider inundation. 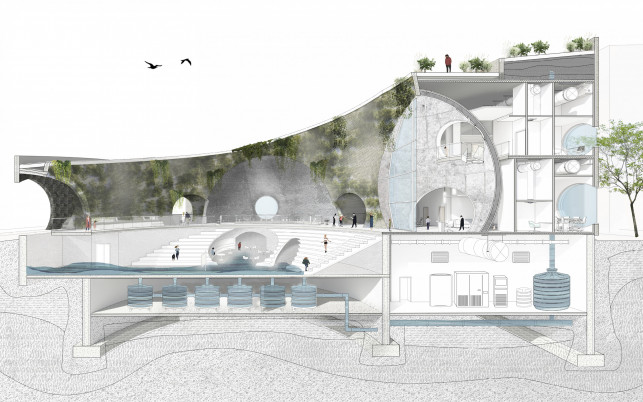 Our project becomes a temporal representation of memory and education through experience. As you move towards the back (north) of the site, the architecture becomes more and more preventative. The landscape and the building become one, terraced bio brick and landscaping builds up as a continuously accessible green roof, maintaining the idea of community engagement. We propose a sustainable “living” porous bio brick, which is able to grow organic material on the facade. As the building itself becomes inundated this natural material becomes stripped from the bio brick, and it leaves a white ghosted remnant of the past, a temporal memory of landscape. 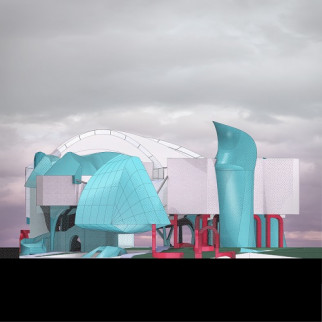 How can a recreation center also navigate the realities of climate disasters? In the post Hurricane Sandy age, many cities have underlined the need to be resilient. Boston is one of these cities who have not only planned, but also started implementing both soft and hard infrastructures that would prepare the city for disaster scenarios such as one hundred year floods and rising sea levels.

Primal Folies navigates between the playful aspirations of a community recreation center and the realities of climate resiliency. We employed a landscape barrier, a mixture of softscapes and playful hardscapes that is driven by the formal quality of the East Boston urban map. This barrier condition will be integrated into the East Boston elevated waterfront parks strategies. These playful hardscapes, the Primal Folies, then transform into the main structures of the floating buildings, rendered safe from flooding during 100-Year Floods. The floating structure presents an opportunity for natural spaces below, around and along the water’s edge. Showcasing interactive, playful and educational space both in the building’s underbelly and above. 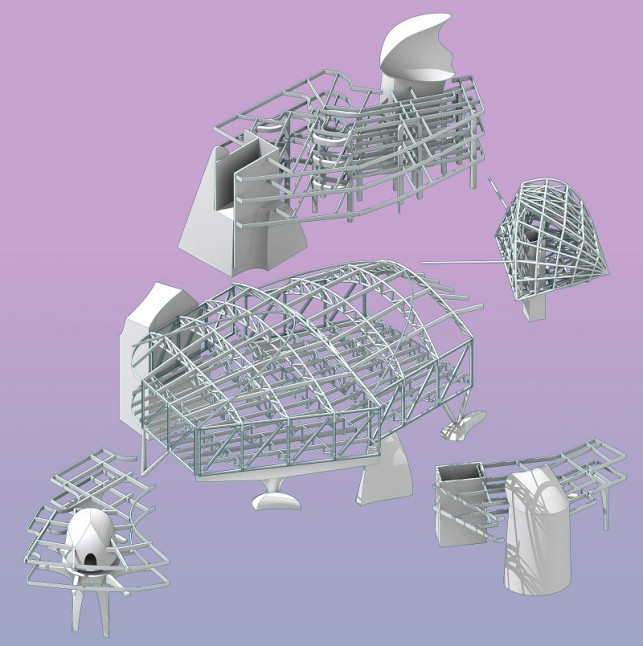 Water performance is our speculative design initiative; performance of the site becomes an experience as it engages with the program on the site. The slightly tilted roof guides rain water into a grand transparent opening, forming an interior water curtain or waterfall depending on how hard it rains. The red fence, which is shaped by the East Boston Harbor boundary, goes throughout the site and spaces to allow water to flow down and support the building structurally. 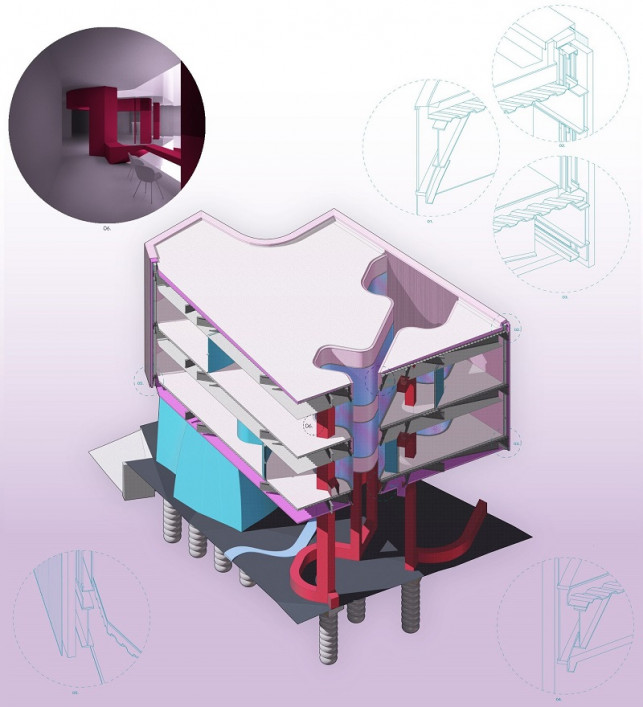 The sound and appearance of water thus exist in the internal digital library and co-working space.  In addition to the building form, water performance generates a dialogue with the playscape through storing and recycling rainwater. The distinctions between interior and exterior space become fuzzy and a porous enclosure is created.