As one of the oldest programs in the U.S., Syracuse Architecture has grown from modest beginnings to become a national leader in educating future architects. 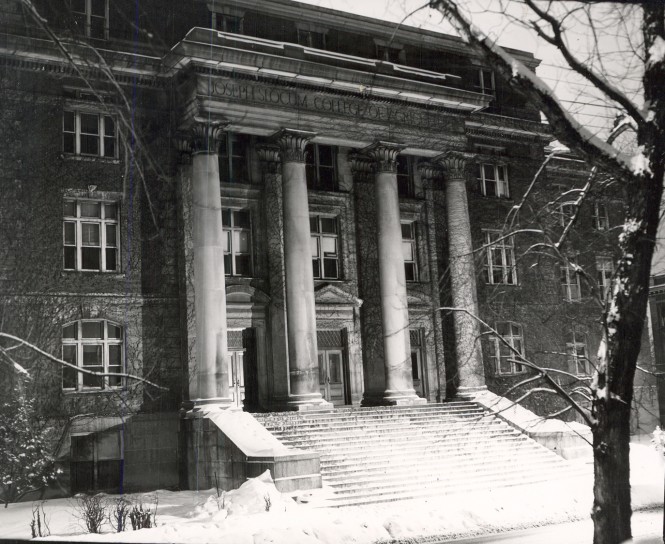 The School has a rich and distinguished history, beginning in 1873, three years after Syracuse University was founded, when architecture was created as one of two new departments within the College of Fine Arts by George Comfort Fisk, dean of the new College of Fine Arts, who founded the Metropolitan Museum in New York.

The department initially offered a four-year program leading to a bachelor of architecture degree, the first program of its kind in the country. Dean Fisk enlisted the services of professors from the painting department and the College of Liberal Arts. He also approached local architects such as Horatio Nelson White, Archimedes Russell, and Ward Wellington Ward, and asked them to teach architectural design – without pay. The reliance on local architects for free instruction continued well into the1900’s, in part due to thrift, but also as a standard practice modeled after the Ecole de Beaux Arts in Paris, the world’s premiere architecture school. This alignment of the architecture department within the College of Fine Arts established a design focus that endures to this day.

The first graduating classes in architecture were small, with 74 students earning degrees between 1900 and 1922. Frances Whipple Bigelow became the first female to graduate from the school in 1898. As the architecture program grew, it faced a constant challenge of finding adequate space. During its early years, the first home of the College of Fine Arts was in the Hall of Languages. It moved to the newly built Crouse College in 1883, then to Steele Hall in 1908, and finally to the newly designed, skylit Slocum Hall in 1919. Slocum was designed by Frederick Revels, an 1895 graduate of the College of Fine Arts who chaired the architecture department from 1902 until 1934, and Professor Earl Hallenback of the Class of 1897. Together, Revels and Hallenbeck designed a number of Syracuse University landmarks, including Carnegie Library, Archbold Stadium, and Bowne and Lyman halls.

During the post-World War I period, European modernism began to seep into American architecture schools. While Syracuse University acknowledged the trend, they continued to emphasize the teaching of more traditional, pragmatic styles. During this period the University realized that a four-year curriculum could not adequately equip an architect for practice. In 1934, Lemuel C. Dillenback was brought in from Columbia University to teach design. He soon became department chair, and under his leadership, a fifth year was added to the curriculum in the form of a thesis, which included construction drawings and specifications, with 184 credits required for graduation.  In 1937 a graduate program in urban planning and research was established. The 1930’s and 1940’s marked the beginning of autonomy for the architecture program.

The school’s pragmatic tone was accentuated after World War II when 150 veterans flooded the program. Anxious to get on with their lives and careers, they were highly motivated and practical about their goals. In 1957, when Dillenback retired, Professor D. Kenneth “Doc” Sargent ’27 succeeded him, insisting on retaining the title and authority of dean. Thus the school became a separate entity from the College of Fine Arts. A prominent practitioner, Sargent began teaching in 1930 and profoundly influenced the program for the next forty years. Sargent placed a high value on professionalism, as well as on a broad liberal arts education. He believed that architects had to be well educated to become leaders, and during his time as dean, a six-year option was created that awarded the B. Arch and M. Arch degrees.

The late ’60s were years of student unrest on Syracuse campus that had its effect on the School of Architecture. In 1969, Sargent resigned as dean. He was succeeded by a series of acting and interim deans, and eventually by John Fisher who led the school as dean for only a few years. Werner Seligmann, an award-winning architect and authority on Frank Lloyd Wright and Le Corbusier, was appointed dean in 1976, and set a clear course for the next dozen years. The school’s visibility and international reputation grew with the establishment of the visiting critics program, lectures and exhibition series, and the establishment of the Florence program in 1980. In the late ’80s, the school received an IBM grant for close to a half-million dollars allowing for the development of a multidisciplinary computer lab in Slocum. In 1990, Seligmann resigned as dean and returned to the faculty. The Florence program, often called “the jewel in the crown of the architecture curriculum,” continues to play a strategic role between the third and fifth years of undergraduate study.

Bruce Abbey, former chair and associate dean at the University of Virginia, was named dean in 1990. Syracuse University, facing a major fiscal crisis created by demographic change, evaluated its programs and concluded that since the School of Architecture was a major center of quality, it deserved additional support. Salaries were raised, Slocum Hall upgraded, new computer facilities installed, and faculty research supported. Architecture students ranked with the best of those admitted by the University, and the hands-on-approach to teaching made the School a model for a student-centered research university. During his twelve-year tenure, Abbey expanded the architecture program through more courses in humanities, more electives, and encouragement of more varied architectural points of view.

In 2002, Abbey stepped down as dean to return to fulltime teaching. Professor Arthur McDonald led the school as interim dean for the next two years while a search was conducted for a new permanent dean.

Mark Robbins assumed the position of dean of the School of Architecture at Syracuse University in 2004. Under the leadership of Chancellor Nancy Cantor, the School and the University became significant forces in the city of Syracuse, helping to create a more urban campus and a denser city while inciting the exploration of the boundaries between the two. During this time, an associate dean and directors of development and communications positions were added to the administrative structure to serve the expanding needs of the school. In 2007, the Syracuse Architecture London program was launched at the University’s Farraday Center and, in 2009, the Syracuse Architecture program in New York City was introduced at a new studio space in mid-town Manhattan.

A five-year scholarship initiative to further the diversity of the student body was introduced as well as recruiting visits to in major metropolitan areas across the country that reinforced this initiative and expanded the School’s geographic draw.  Partnerships were established with other centers at the university to support teaching and faculty research. Robbins stepped down as dean in 2012 and Professor Randall Korman served as interim dean from 2012 through 2013.

In 2013, Michael Speaks became the tenth dean of the School. He was previously dean of the College of Design at the University of Kentucky and is also the former director of the graduate program at the Southern California Institute of Architecture in Los Angeles. As a scholar and leader in design education, Speaks emphasizes innovative approaches and interdisciplinary connections focused on real-world problem solving.

At Syracuse, he has developed a series of workshops at the newly launched Syracuse University Fisher Center in New York City called Design and Politics, introduced new post professional study programs, and established ongoing collaborations with universities and government officials in Taiwan and Hong Kong.