Turning a weakness into a passion is by no means an easy process. It takes discipline, drive, and lots of help. 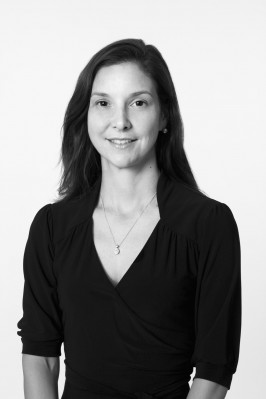 But that’s exactly what Syracuse Architecture alum Nicole Dosso did as she set out on a nearly 20-year career pursuing the technical side of architecture and becoming the woman whose work has forever changed the world’s most famous skyline.

As a freshman in college, Dosso wasn’t convinced the design profession was right for her. Having never picked up a compass or triangle for tracing, Dosso felt at a disadvantage in her initial architecture courses.

“A lot of people coming in had mechanical drawing in high school,” she said. “I had never drafted anything in my entire life. I unpacked this big box of tools on my first day and it was daunting.”

Dosso soon learned that if she was going to become an architect, balancing her workload was a priority – a skill she would carry into a career managing multi-million dollar projects and teams of contractors, architects, and designers as technical director at Skidmore, Owings & Merrill.

Dosso attributes her success to the many mentors who shaped her education and career including Tim de Noble, Margaret Griffin, Bill Scarborough, and Carl Galioto.

As a sophomore, Dosso experienced a turning point in her education when Scarborough, her design technology professor, gave her an ultimatum after she failed the final exam.

“He was a very tough professor and I was doing miserably,” she said. The class had something like 13 F’s and 36 D’s that semester. I found out that people had gotten worse than me on the exam and passed the class. But I failed.”

Scarborough told her that if she had taken time to visit during his office hours, she would have succeeded. But he offered to change her grade to a D.

“He said to me, ‘If you take the D, the likelihood of you being an architect is slim because you don’t understand the fundamentals of what you’re doing,’ she said. “I thought about it for a split second and took the F and repeated the class.”

That determination to succeed was critical to Dosso’s eventually landing a position SOM. Two years after graduation, she was working for Perkins Eastman Architects in New York but saw the opportunity to start seeking out other positions. With the help of her father, who accompanied her to firms throughout the city with a shoebox full of resumes, Dosso hand-delivered her qualifications to different practices hoping to get an interview.

“I sent my resume several times to SOM and didn’t hear back, so I figured I’d keep sending them,” she said. “By the time I finally got an interview with Carl Galioto, I had heard that nobody gets a job on the spot with them. But he offered me the job immediately. I said I would have to think about it and he was dumbfounded.”

Dosso started working in their technical department in 1998, turning her biggest weakness in college into her life’s work.

“A lot of my friends laughed when I told them I was going to SOM to work in their technical department,” she said. “I definitely struggled with it, but I fell in love with the building side of architecture and getting into the details.”

Last December, Dosso used her plastic visitor’s pass to enter One World Trade Center for a meeting with The Durst Organization who now manages the building. Having spent eight years leading the construction effort on one of the world’s most controversial building sites, Dosso entered the tower as a guest and was asked to show identification at the door.

“It was kind of anti-climatic,” she said. “I’m a nobody now but I used to command the ship here. It was incredibly humbling and rewarding. It was actually very satisfying to get my card and go through the turnstile.”

Architecture is not instant gratification, according to Dosso. Every project comes with its own challenges based on the level of commitment and length of time it takes to build. She said she can isolate her entire career into almost two moments professionally: finally getting to ground level at One WTC and completing 7 WTC in 2006.

“7 World Trade Center was the first time since graduating college that I felt like I had really accomplished something,” she said. “It had taken a long time to get there, but every moment had been worth it – every argument, every moment out in the field. We certainly weren’t working in ideal conditions being very close to the ground zero recovery effort, but that moment will remain a pivotal memory for me.”

Dosso was appointed as a technical director of the New York office over a year ago where she now manages market sectors in New York and the Middle East. Dosso’s commitment to development in New York stems from her childhood touring the water tunnels and studying the city’s infrastructure with her father who worked for Local Union No. 3, an electrical construction union, for over 50 years. Upon visiting the construction site of WTC a few years ago, her father wasn’t too impressed, noting how the project was “small potatoes” compared to the jobs he worked on underground.

Though she now oversees SOM’s technical department, Dosso chooses to personally manage a few of what she considers the most challenging projects, including 35 Hudson Yards. Dosso also has become increasingly interested in the details of designing for interiors, a growing group at SOM.

“In my career, I’ll probably never be involved in another project of such scale and impact worldwide as the World Trade Center. It’s a once-in-a-lifetime,” she said. “But the projects I’m currently involved in are equally as intriguing and important. These are the sites that will reshape Manhattan.”

One of Dosso’s goals is to help mentor emerging professionals, especially women coming out of school. Throughout her early career, Galioto, Dosso’s former mentor at SOM, urged her to constantly ask herself where she wanted to be in five years, then go after the projects that she knew would have the greatest impact on her career.

“You have to plan your own career path,” she said. “People aren’t always going to come and seek you out. Take initiative and plot out what you want to do.”

Five years from now, Dosso doesn’t know what new project she’ll be working on. But she does know that she is not done learning and she’s ready for anything.

“One of the most interesting things about architecture is that it’s an ever-evolving process and each project comes with its own challenges,” she said. “I think that’s why architects become so passionate about what they do. World Trade Center is certainly not the pinnacle of my career.”

Dosso will lecture at 5 p.m. on Tuesday, March 3 at the Syracuse University School of Architecture on her experience leading construction of the World Trade Center.