Each semester, upper-level architecture students participate in the visiting critic program that brings leading architects and scholars from around the world to the School. Five studios will be held this spring. 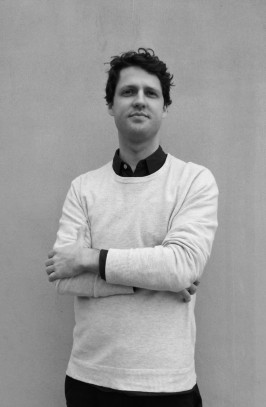 Benjamin Vanmuysen will teach the visiting critic studio, “Binary Flagship Store: An experiment with design velocity” that will explore two opposite design extremes: under– and overdesign. Students will be tasked with designing a 10,000 square-foot fashion store in the village of Rhinebeck, a town in Dutchess County, New York, as part of a larger conglomerate of luxury boutiques. By designing in different gears, the students’ natural design processes will be counterintuitively shortened and extended in order to achieve the desired diametrical design conditions. Through this extreme value analysis, the studio will not only be able to evaluate the repercussions of time-variation on its design outcome, but also measure its added, or perhaps subtracted, value.

Architectural designer Benjamin Vanmuysen came to Syracuse Architecture in fall 2019 as the school’s fourth Harry der Boghosian Fellow. Before joining Syracuse University, Vanmuysen worked at Diller Scofidio + Renfro, an interdisciplinary design studio in New York City where he worked, among others, on the competition entry for KANAL – Centre Pompidou—a new cultural hub in Brussels and the V&A Here East project in London’s Queen Elizabeth Olympic Park. Previously, he worked for Reiser + Umemoto Architecture in New York City and the Dutch architectural firm, Office for Metropolitan Architecture based in Rotterdam. Vanmuysen’s work has been published and exhibited internationally in South Korea, France, Belgium and the United States.

Vanmuysen earned his undergraduate degree in architectural engineering at the KU Leuven in Belgium and studied for two years at the Southern California Institute of Architecture (SCI-Arc) before completing a master of architecture degree at Princeton University.

On April 24, a culminating exhibition of Vanmuysen’s fellowship research will open in the Slocum Hall Marble Room. 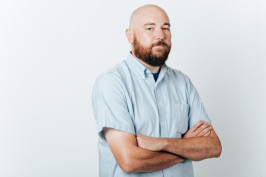 Kovacs will teach the visiting critic studio, “Collage and Architecture” where collage in architecture—normally taboo—will be celebrated. By following a disciplinary narrative of collecting material, both images and objects, that serve as both reference and inspiration, students will interrogate the use of collage in the design process through both 2D and 3D architectural representations and through both physical and digital techniques of production and documentation. Students will also have the opportunity to travel over spring break to Los Angeles to visit an urban block downtown, which serves as the site of one of their projects—the design of a new residential/hotel/mixed use complex that takes the form of a tower.

Andrew Kovacs ’06 is a Los Angeles-based architectural designer and educator. He is the founder of Office Kovacs and creator and curator of Archive of Affinities, a website devoted to a constantly updated collection and display of architectural b-sides—”architectural images that exploit the dual meaning of affinity and the likeness associated with the word as both personal predilection and the relationship between things.”

Kovacs’ work on architecture and urbanism has been published widely including A+U, Pidgin, Project, Pool, Perspecta, Manifest, Metropolis, Clog, Domus and The Real Review. The recent design work of Office Kovacs includes a proposal for a network of parks in the downtown Los Angeles alleys, a large-scale installation titled “Colossal Cacti” at the Coachella Valley Arts and Music Festival, and an experimental camping pavilion in the Morongo Valley Desert.

Kovac will give a public lecture at the school on Jan. 28 at 5:15 p.m. in Slocum Auditorium. 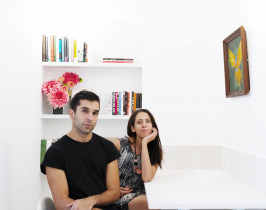 Diamantopoulou and Kolb will teach the visiting critic studio, “Fair Trade” in which students will work on designing a new building for the New York State Fair. Historically orientated towards celebrating new technologies and innovations in the agricultural industry, the fair gives ample ground to test new ideas around fluctuations in local economies and ecologies. Students will complete the fair’s southwestern corner by designing a series of new buildings, each demonstrating the possibilities of reuse centers on one material proliferate in construction and demolition (C&D) waste. The resulting buildings will be interactive and publicly minded; they’ll be fit for a fair. During the studio, students will also have the opportunity to travel to New York City, a city where almost half of all waste generated—six million tons each year—is made up of C&D debris.

Ivi Diamantopoulou is co-director of New Affiliates and a licensed architect in Europe and an American Institute of Architects (AIA) associate with over a decade of experience in realizing built work between Europe and the United States. She has taught history, theory and design at various institutions, most recently as the Andrew Mellon Endowed Chair in Environmental Architecture at Sarah Lawrence College. Diamantopoulou holds a Master of Architecture from Princeton University, where she was awarded the Suzanne Kolarik Underwood Prize for excellence in design and a Stanley J. Seeger fellowship; and a Diploma with honors in Architecture and Engineering from the University of Patras in Greece.

Jaffer Kolb is co-director of New Affiliates and currently teaches at Columbia’s Graduate School of Architecture, Planning and Preservation. He writes, most recently guest editing a special issue of Log called “Working Queer” in 2018, and sometimes curates. Kolb was the 2015 Muschenheim Fellow at the University of Michigan’s School of Architecture, and before that worked as a designer in New York, Chicago and Los Angeles. Previously, he worked the 13th Venice Architecture Bienniale under David Chipperfield and served as the U.S. editor of the Architectural Review. Kolb holds a master of architecture from Princeton University, a master of urban planning from the London School of Economics and a bachelor of arts in film studies from Wesleyan University.

Diamantopoulou and Kolb will give a public lecture at the School on Jan. 31 at 5:15 p.m. in Slocum Hall.

Koreitem and May will teach the visiting critic studio, “…For the Duration of the Spectacle (or Whatever Happened to the Event)” that will explore the idea that there’s no fixed relationship between architectural form and the events that take place within it—a theory argued since the 1970s by Bernard Tschumi, architect, writer and educator commonly associated with deconstructivism. By experimenting throughout the semester with demountable architecture—buildings whose very identity is to be quickly and cheaply assembled, disassembled, moved, and reassembled—the studio will ask Tschumi’s question anew: “what would it mean to relentlessly state that there is no architecture without event…?” Students will be tasked with researching and documenting a series of precedents in the history of demountables and then designing a demountable structure whose program is the production of communal feasts.

Zeina Koreitem is founding partner of MILLIØNS and Design Faculty at the Southern California Institute of Architecture in Los Angeles. Previously, she held positions as Design Critic in Architecture at the Harvard Graduate School of Design (GSD) and taught at the University of Toronto and University of Southern California’s School of Architecture (SCI-Arc). She has previously worked in the offices of Dominique Perrault Architecture in Paris, and Pritzker winners RCR Arquitectes in Olot, Spain. Koreitem holds a BArch from the American University of Beirut, where she received the AREEN Project Award of Excellence in Architecture, and the Outstanding Creative Achievement Award; an MArch II from the University of Toronto; and an MDes in Design Computation from Harvard GSD, where she received the Daniel L. Schodek Award for Technology.

John May is founding partner of MILLIØNS, professor of architecture and director of the Master in Design Studies Program at Harvard GSD, and founding co-director (with Zeynep Çelik Alexander) of The Instruments Project—an ongoing exploration of the philosophical and historical dimensions of contemporary design technologies. He previously taught at Massachusetts Institute of Technology, University of California, Los Angeles (UCLA), Southern California Institute of Architecture (SCI-Arc) and the University of Toronto. In 2012, May was named National Endowment for the Humanities Visiting Professor in Architecture at Rice University. He holds a bachelor of arts in philosophy and visual art from the College of William and Mary, a master of architecture (AP) with distinction from Harvard GSD, and a doctorate in geography and environmental studies from UCLA.

Koreitem and May will give the D. Kenneth Sargent Visiting Critic public lecture at the School on March 5 at 5:15 p.m. in Slocum Auditorium. 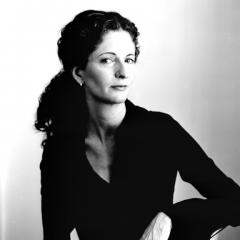 Roy will teach the visiting critic studio, “Tomkins Cove Quarry: Extraction, Succession, Retreat” that will explore possible future alternatives for the abandoned 199-acre limestone quarry and its vast crater along the Hudson River in Stony Point, New York. As a former source of construction materials for the development of New York and other regional cities, Tomkins Cove has been unused since 2012 when extraction operations ceased. Tilicon, the quarry owner, in partnership with Hudson River Resources, has recently proposed an “extraction-in-reverse” proposal to return the quarry to its original topography by filling it with about 40 million cubic yards of selected C&D materials. While it sounds appealing, the project’s scope represents potentially enormous negative impacts to the Hudson River. Taking ‘spontaneous succession’—a method of ecological restoration where exposed base-rich bedrock allows spontaneous development of new, diverse, species-rich ecosystems over long timeframes—as a given, students will research and investigate the quarry, its broader context, and the development of a design proposal for the future of the site.

Roy is an adjunct assistant professor at Columbia’s Graduate School of Architecture, Planning and Preservation. She is the founder and principal of Roy Studio, the New York City-based design firm she established after winning the 2001 MoMA/P.S.1 Young Architect’s Program.

Shortly after establishing her design firm, Roy was tapped by the iconic furniture manufacturer Vitra, for its U.S. headquarters in the Meatpacking District and by developers for the design of High Line 519, a twelve-story condominium—the first new building completed adjacent to the High Line in New York. Among other clients are L’Oreal, Natura and Virgin Atlantic, as well as galleries and art institutions, including the Canadian Center for Architecture, the Design Museum London, Gallery Met at Lincoln Center and Deitch Projects. Recent projects include a collaboration with musician Questlove and a 30-story mixed use tower in SoMa San Francisco.

Published widely in books, magazines, and critical journals, Roy’s work has been exhibited in museums and galleries and was the subject of a solo exhibition, ROY Design Series 1 at the San Francisco Museum of Modern Art (SFMoMA). Her work is also represented in the permanent collections of The Museum of Modern Art in New York, SFMoMA and The Art Institute in Chicago. She is currently collaborating with a neuroscientist on explorations in the relationships between neuroscience and architecture.

Roy will give a public lecture at the School on March 31 at 5:15 p.m. in Slocum Auditorium.