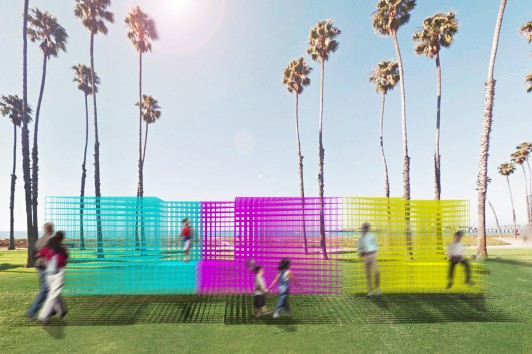 "Runaway" pavilion; SPORTS, Molly Hunker and Greg Corso, 2016Chosen for its bright, playful character, functional modularity, and thoughtful dialogue with Santa Barbara’s local atmosphere, SPORTS’ submission, entitled Runaway, will be installed in February 2017 at the Waterfront area of Santa Barbara, the first of several locations the pavilion will travel to throughout 2017.

Inspired by similar annual contemporary pavilion initiatives ranging from the Serpentine Pavilions in London to MoMA PS1’s Young Architects Program in New York, MCASB’s takepart | makeart’s pavilion design competition builds upon previous engagement with contemporary architecture and design through the 2014 exhibition Almost Anything Goes. SPORTS will receive an award of $5,000 as well as an additional $45,000 to support their project, and are working with MCASB curators to produce, build, permit, and install the final design. MCASB Executive Director, Miki Garcia, states, “SPORTS’ design is emblematic of bold, innovative thinking that can both challenge and produce rich dialogue with the traditional, California Mission style aesthetic that typically characterizes Santa Barbara.” She continues, “I love the way that Runaway’s design draws upon the history of California’s Light & Space movement to call into question current issues of visibility within Santa Barbara’s communities.”

Created out of steel matrices, the pavilion design features three modular pieces that can be assembled in a number of ways. Hunker explains, “The various orientations allow for a variety of programs to be supported by the pavilion throughout its life-span and different sites. The intention is for the three structures to be oriented differently at each of the site locations so as to have a renewed existence, and to provoke new uses and interesting engagements at each new location.”

As a contemporary artwork, Runaway invites communities to view and interact in unexpected ways with their surroundings, and, in doing so, encourages residents as well as artists to consider how contemporary design can activate and energize public spaces. “Our design emphasizes a vibrantly saturated visual environment that aims at ‘architecturalizing’ the aesthetic qualities of air in Santa Barbara,” says Hunker, alluding to the ever-changing light and sky of Santa Barbara that is well-loved by locals and tourists alike.

Runaway will be the first element of takepart | makeart: taking art outdoors to be installed in Santa Barbara. Subsequent programming will center around the pavilion’s location, featuring a series of workshops and events led by w ell-known social practice artists.

SPORTS is the design collaboration of Greg Corso and Molly Hunker. Their work is interested in the border between the everyday experience and the extraordinary or unexpected. A primary consideration in their work is how unconventional notions of material, craft, and cultural production can both complement and provoke contemporary ideas of space, aesthetics, and atmosphere. Ultimately, SPORTS is interested in expanding the territory of design while expanding the audience. They privilege an approach of engagement with users through familiarity, clarity, extraordinary visual experience, and an attitude of playfulness and whimsicality. Since forming in 2010, SPORTS has constructed a number of large-scale architectural installations and pavilions around the country, and their work has been exhibited, reviewed, and published widely. Recently, SPORTS was named a “Firm to Watch” by Architectural Record Magazine.