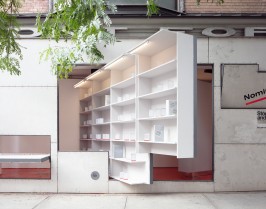 Emily Abruzzo is a founding principal of Abruzzo Bodziak Architects. She earned a B.A. from Columbia College, Columbia University, and a Master of Architecture from Princeton University, where she also received a Certificate in Media and Modernity and was named a Fellow at The Center for Arts and Cultural Policy Studies. In addition to her practice, Abruzzo has taught design, materials, and theory courses at numerous institutions and is currently a Critic at the Yale School of Architecture.

Gerald Bodziak is a founding principal of Abruzzo Bodziak Architects. He earned a B.S. from the University of Michigan Taubman College of Architecture and Urban Planning, a MArch from Princeton University. In addition to his practice, Bodziak has been a lecturer and guest critic at numerous institutions, teaching design, drawing, and construction technology courses at, among others, Columbia’s Graduate School of Architecture, Planning and Preservation and The Rhode Island School of Design.