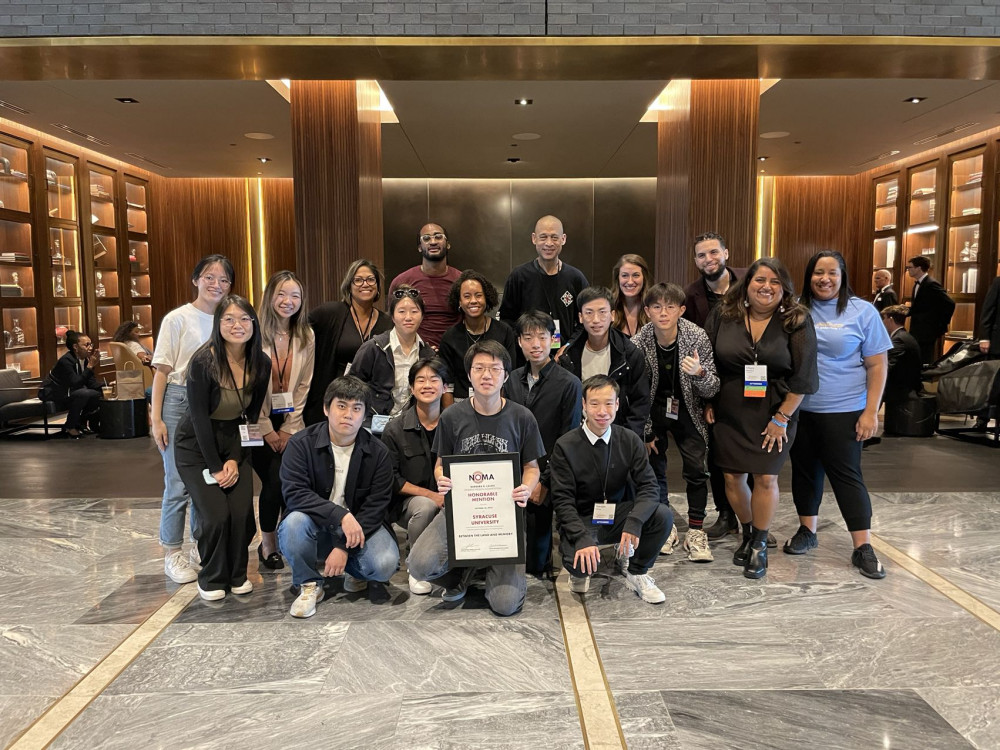 The Syracuse Orange chapter of NOMAS received an Honorable Mention for their project “Between the Land and Memory.”The Barbara G. Laurie Student Design Competition is one of the highlights of the NOMA conference for both student and professional members. Originating more than 20 years ago with just three schools, the competition today features the work of nearly 30 NOMAS chapters from across the country participating in a two-day competition.

This year’s event challenged student chapter teams to focus on a project that serves to address the gentrification and displacement of North Nashville community members as the result of Dwight D. Eisenhower’s Interstate Highway System, built in the 1960s. Once a thriving community populated with businesses, music clubs and historically Black colleges and universities (HBCUs), the construction of Interstate 40 demolished homes and separated the North Nashville neighborhood. Specifically, teams were asked to show how design and architectural strategies can rebuild a community. Students were to envision a complex that serves as a cultural center to preserve the history of North Nashville and a new bridge to serve as a landmark and monument for the community.

The Orange NOMAS design team’s project, “Between the Land and Memory,” which placed fourth overall in the competition, aims to be an extension of the community, both physically and culturally, through a simple, expressive design that concentrates on restoring the land taken and recreating the urban sequence that was interrupted by the interstate.

The project proposes to stitch the community back together by providing a land bridge to reconnect the two sides of Alameda Street, an open public park for activity and leisure, integrated legal mural walls along the bridge and highway, and a playground at the end of the bridge that further integrates the design into the neighborhood. 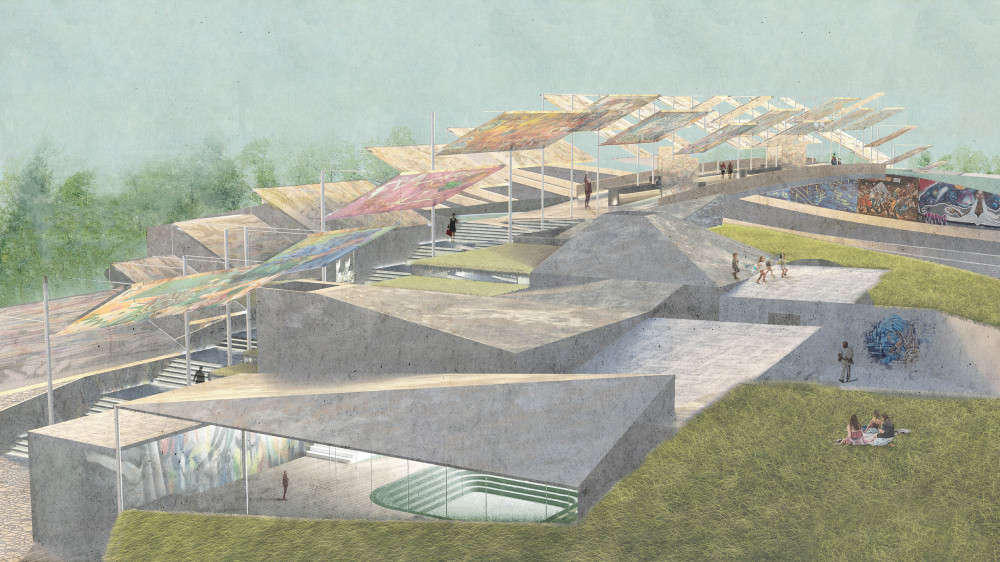 Conceptual drawing of “Between the Land and Memory,” which placed fourth overall in the Barbara G. Laurie Student Design Competition at the 2022 NOMA conference.The landscape is modified to create a gentle hill that makes the transition from the street level and the bridge level smooth and enjoyable. Along the hill, people encounter the market space for local small businesses, meander in an open grass area for picnics and activities and arrive at a museum displaying North Nashville’s history. The project’s main building complex, zoned for CN (commercial neighborhood), is embedded into the landscape, and includes such programs as galleries, a performance/conference hall, music club, art studios and workshop/classroom space.

The project’s name comes from the team’s symphonic treatment and arrangement of the landscape and one of the major design features—canopies composed of inverted roofs, making it easier for local mural artists and organizations to display their commissioned artwork illustrating the history and culture of North Nashville.

“We address potential displacement by considering the community’s needs, giving local artists a space to create, making the program financially beneficial for the local economy and minimizing the interruption to the immediate built context by blending seamlessly into the city fabric,” the team’s entry explains. “Walking in between the land and memory, people will not only remember the history of the community, but enjoy the landscape designed for and by the community.” 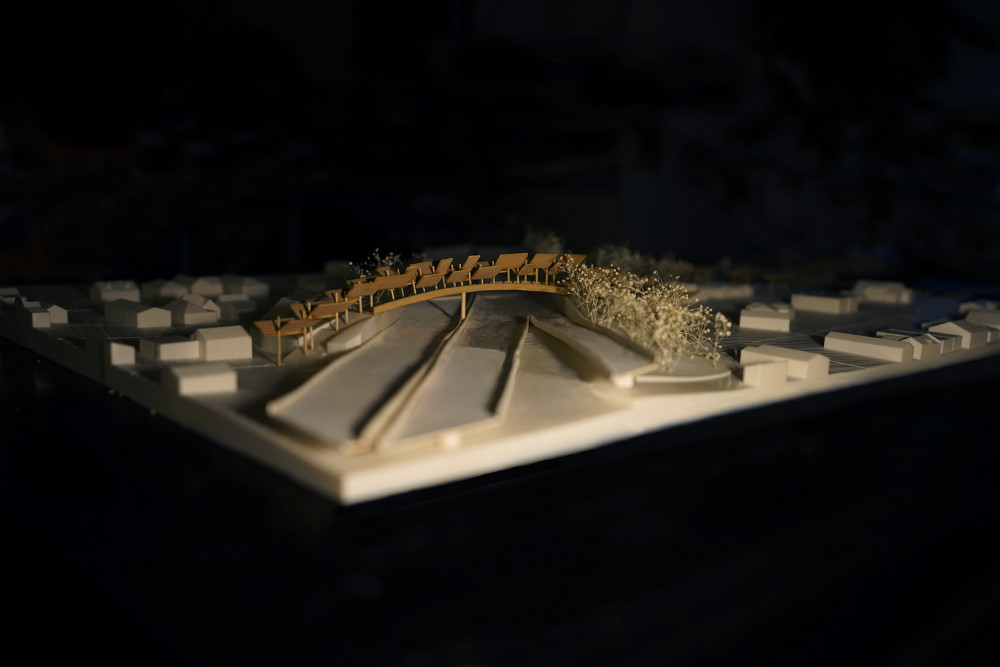 “The success of this year is a collective effort from our nine team members, three faculty advisors and the NOMAS e-board,” says Shen. “The four month’s preparation was an unforgettable journey, and one of the highlights of my study experience at Syracuse.”

“We are very proud of our NOMAS chapter and this team who have continued the success of past winners,” says Michael Speaks, dean of the School of Architecture. “The competition and the NOMA conference in Nashville also provided our students an opportunity to meet peers from other schools as well as Syracuse Architecture alumni.”

This year’s national conference, UNPLUGGED—the first in-person since 2019—attracted more than 1,300 NOMA members, allies and students. Conference attendees honored the achievements of its members, learned from industry peers through inspiring keynotes and educational seminars, and collaborated on opportunities that advance NOMA’s mission to increase the diversification of Blacks and all minorities in the design and architecture profession. The next NOMA conference is scheduled for October 2023 in Portland.

For more information on the Syracuse Orange chapter of NOMAS, contact nomassyr@gmail.com.