A team of School of Architecture students led by Julia Czerniak, associate dean and professor and Professor Ted Brown have spent the last five months immersing themselves in the culture, values, history, and peoples of two towns on the banks of Narragansett Bay, Rhode Island, as part of the Envision Resilience Narragansett Bay Challenge, which called on university students around the country to develop adaptive and creative solutions to sea level rise.

“Instead of experiencing anxiety and paralysis in the face of climate change, we have a window of opportunity to imagine how to adapt and even thrive in the future,” says Wendy Schmidt, founder of ReMain Nantucket. “While the Challenge began as an exercise in big ideas, we hope it will also spur big action—in Narragansett Bay and in all the world’s coastal towns and cities, which hundreds of millions of people call home.”

Czerniak and Brown incorporated the challenge into their spring 2022 visiting critic studio, “Design Scenarios for Adaptive Coastal Communities” that takes the position that although protection is one way of addressing rising water, we must engage climate change not only through mitigation but by reexamining our lifestyles and patterns of consumption.

“The broad charge is to rethink our world, not simply save it,” says Czerniak. “There are a lot of wrongs that can be addressed.”

The students focused on the town of Warren and the village of Wickford, two small—and quite different—coastal historic communities along Narragansett Bay that share a common future; they are slowly going under water. Through researching moments of natural and cultural adaptation through time and across scale, traveling to the sites for ground truthing, and meeting with local experts and residents, they tested a set of design scenarios for each of the sites to adapt to the challenges of climate change and be resilient to future changes through the lens of architecture.

Using scenario planning, an apt approach that offers a way to assert control over a rapidly changing world by identifying assumptions and determining possible responses, the students set up the scenarios for each town as IF, THEN statements and then isolated and tested what it meant to alternatively RETREAT & ADAPT (moving settlement to higher ground and proposing novel ways of living that is more climate friendly); EMBRACE & ENGAGE (remaking shorelines to participate with rising waters and open them up to common use by human and non-human species); or PROTECT & ABSORB (by preserving invaluable resources by innovating ways to stay put).

In responding to the needs of these communities, the students presented ideas that are big, bold, and innovative, challenging entrenched ways of thinking and showcasing radical reimagining of these coastal areas.

Known as the smallest town in the smallest county in the smallest state, the town of Warren, Rhode Island’s shorelines are bordered by Belcher Cove and Warren River. Though not quite as popular with tourists as its neighbors, Warren—once a bustling port for whaling and shipbuilding—still draws a steady seasonal crowd to its working waterfront and downtown. This ancestral land of the Pokanoket Nation, Warren continues to rely on its coastal location for much of its economy, way of life and recreation. 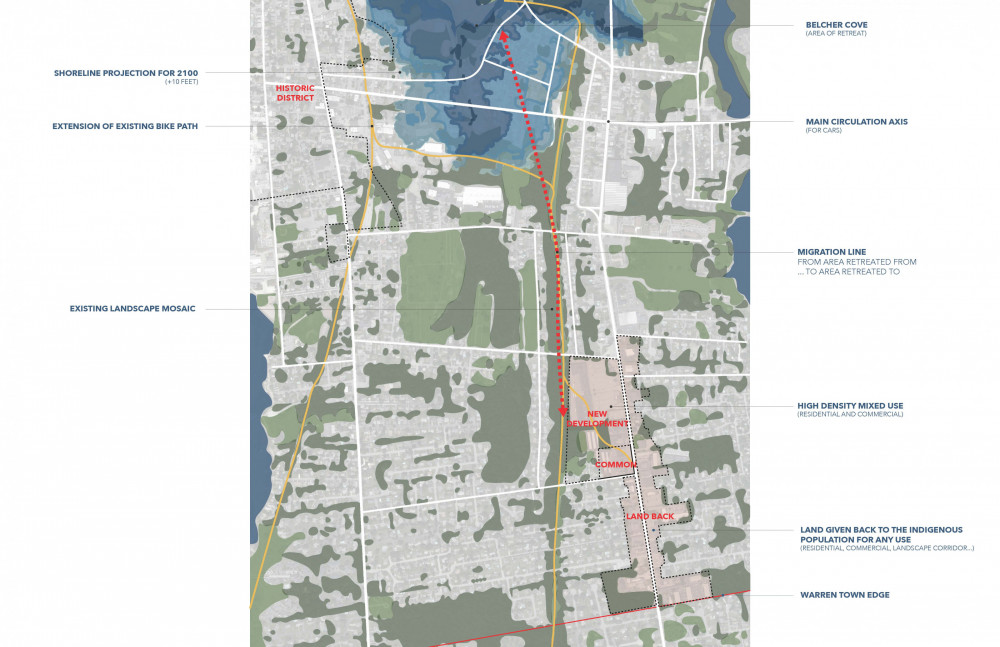 RETREAT & ADAPT scenario for the Town of Warren by Clara Faure-Dauphin ’23 (B.Arch) and Ayana Ayscue ’23 (M.Arch)Students Clara Faure-Dauphin ’23 (B.Arch) and Ayana Ayscue ’23 (M.Arch) concentrated on the RETREAT & ADAPT scenario by rethinking the use of land for higher density communities, for land reparation and for public and ecological corridors of connectivity. By introducing a multi-use development on Metacom Avenue, the existing residential area, the team prioritized a relationship between land retreated to and land retreated from. 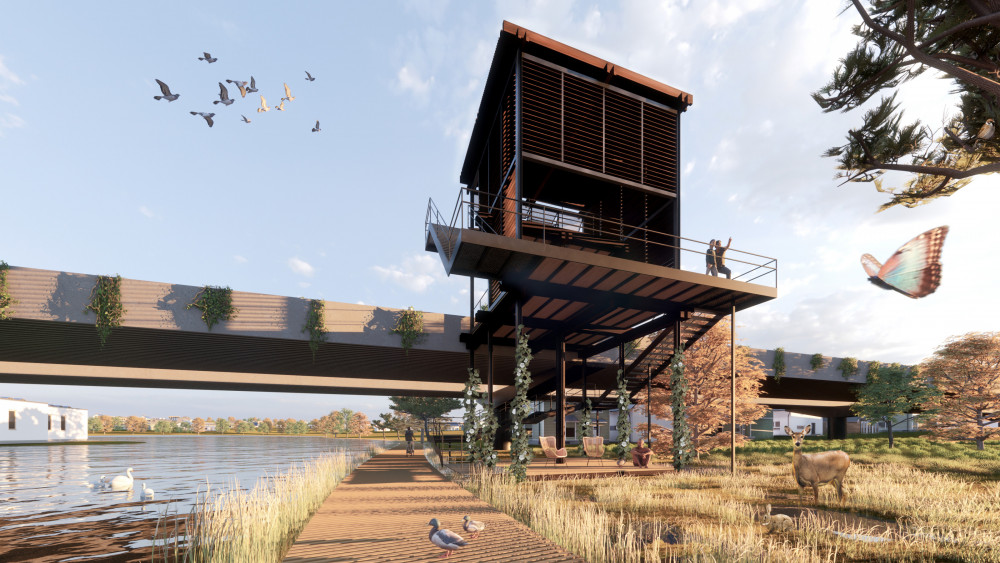 EMBRACE & ENGAGE scenario for the Town of Warren, drawing by Ruoxi Li ’23 (B.Arch)Instead of treating the shoreline as a barrier where the sea puts people at risk, team members Ruoxi Li ’23 (B.Arch), Muge Zhang ’24 (B.Arch) and Tony Fitzgerald ’23 (M.Arch) used the EMBRACE & ENGAGE scenario to reimagine Belcher Cove as a multi-species common that changes with sea level rise and can be used seasonally for recreation, habitation and business. 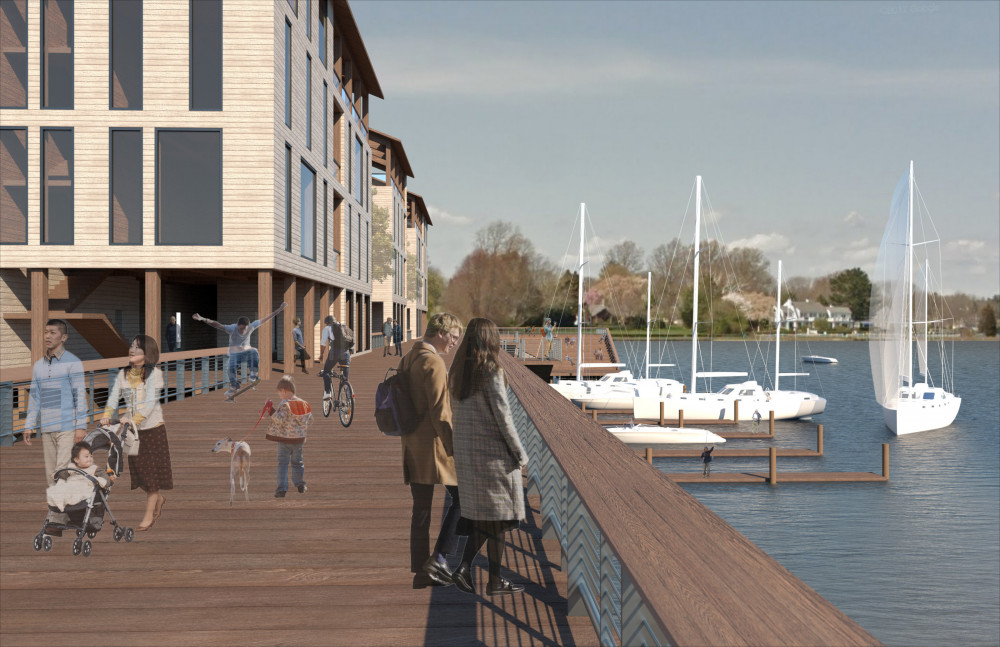 PROTECT & ABSORB scenario for the Town of Warren, drawing by Khoi Nguyen Chu ’24 (B.Arch)Students Khoi Nguyen Chu ’24 (B.Arch) and Zhuofan Song ’24 (B.Arch) focused on the PROTECT & ABSORB scenario by proposing a new recreational waterfront along Water Street, an important street close to the coastline with a large commercial area that is exposed to the sea. By reviewing the town’s historic plans, the team posited that the current coast had lost its urban form and proposed to reintroduce it by designing new development that is climate friendly and economically generative: mixed-use housing with commercial space.

The original home of the Narragansett Nation, the historic village of Wickford sits on the west side of the Bay and is one of the oldest preserved colonial villages in the country, dating back to the 17th century, with structures from the early 18th and 19th century. With a long maritime and fishing history, Wickford’s economy remains tied to the water through boating, fishing, and tourism. Its population is double that of Warren and is a popular summer destination for sailing, shopping, and fine cuisine. 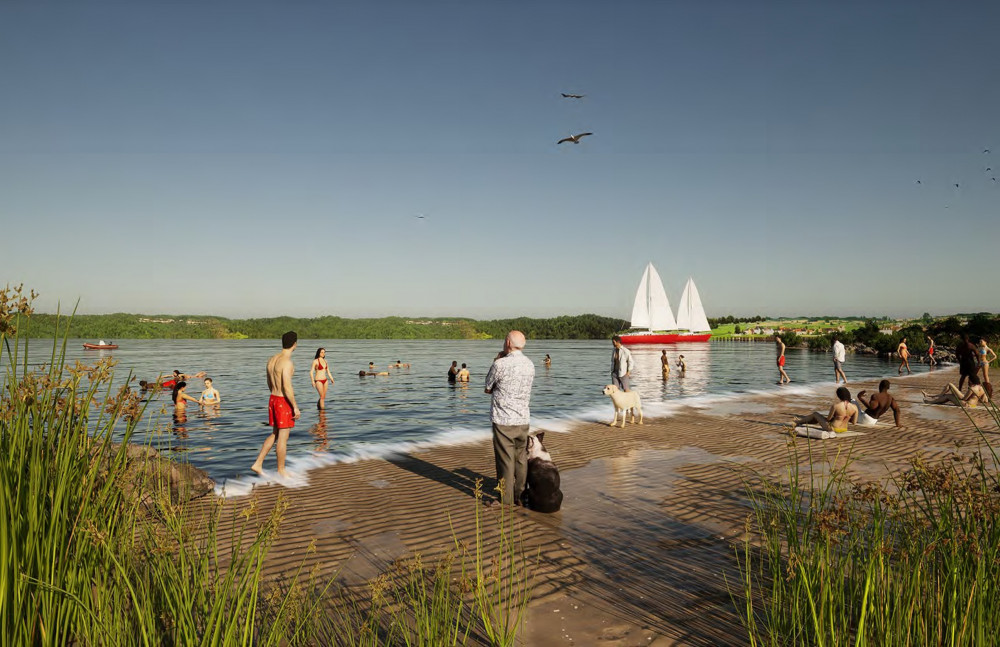 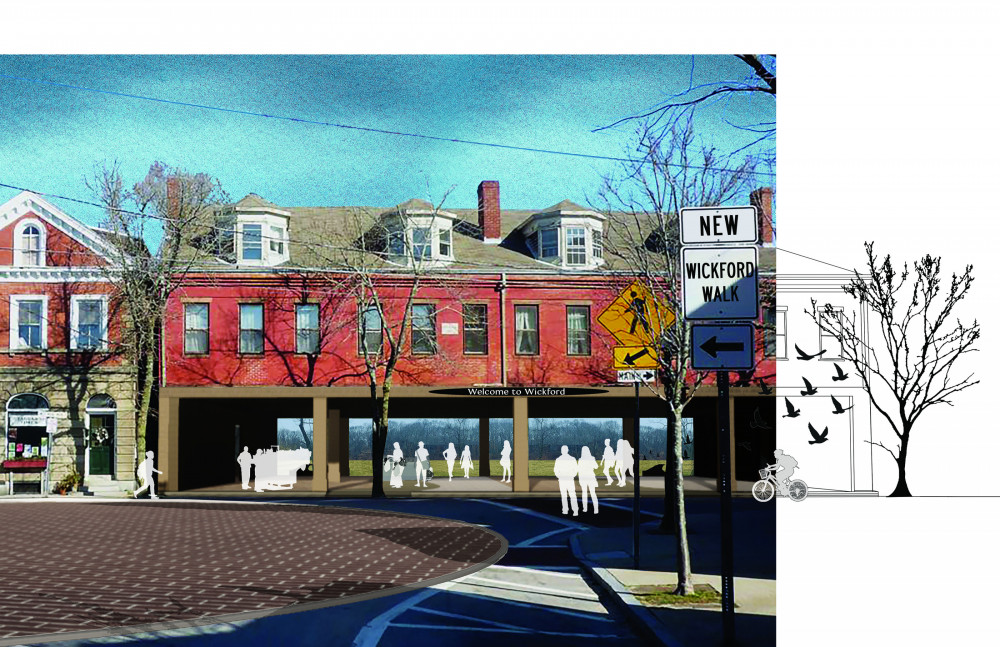 EMBRACE & ENGAGE scenario for the Village of Wickford by Troy Schleich ’23 (M.Arch) and Ruth Shiferaw ’23 (M.Arch)By using the EMBRACE & ENGAGE scenario, students Troy Schleich ’23 (M.Arch) and Ruth Shiferaw ’23 (M.Arch) offered an adapted version of the “Wickford Walk” in contradistinction to the current historic walk connecting significant areas of the town. Defined by its role as a historic seaside village, the new Wickford Walk offers three key zones—recreational, educational, and ecological—that enable residents and visitors to embrace a new relationship with the water. 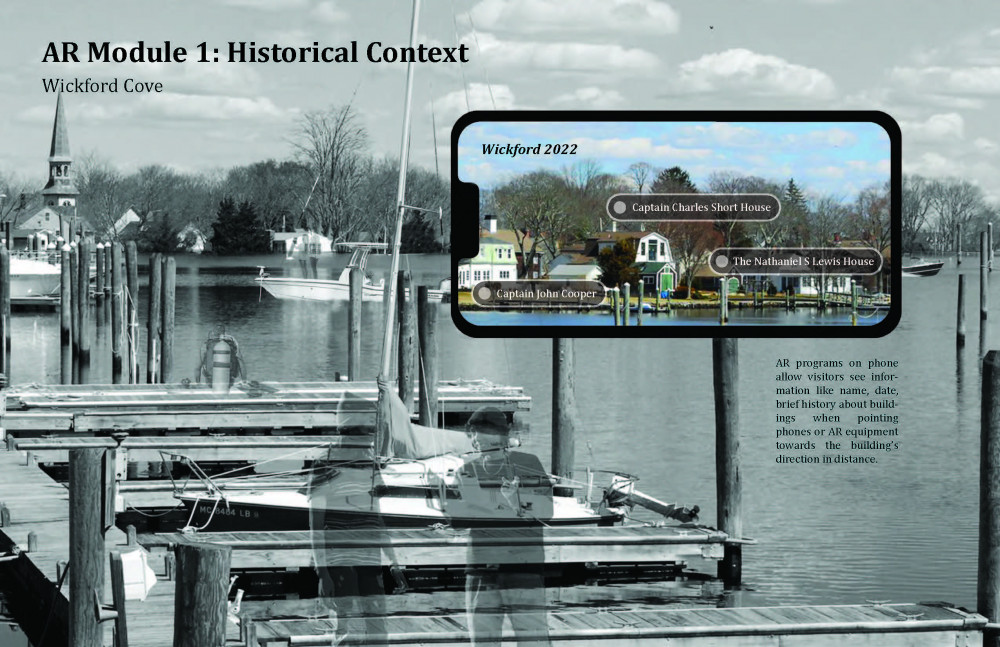 PROTECT & ABSORB scenario for the Village of Wickford, drawing Yifei Xia ’23 (M.Arch)Students Parker VanderVen ’24 (B.Arch) and Yifei Xia ’23 (M.Arch) researched the PROTECT & ABSORB scenario, with a focus on the historic assets endangered by sea level rise. By choosing to protect Wickford’s historic district, the team reimagined (over time) preservation and engagement of the colonial buildings of the village along Main and Brown Streets. Through alternative strategies such as introducing absorptive surfaces, employing natural barriers, elevating buildings and infrastructure, and deploying new forms of immersive technologies such as augmented reality, they proposed new ways to protect the memory of the village and celebrate the history of Wickford.

In late April, the students presented their ideas virtually to the larger Envision Resilience Challenge cohort, including teams from the other participating universities, during a final jury review, who commended them for their clear, impactful proposals, superb illustrations and articulate arguments. 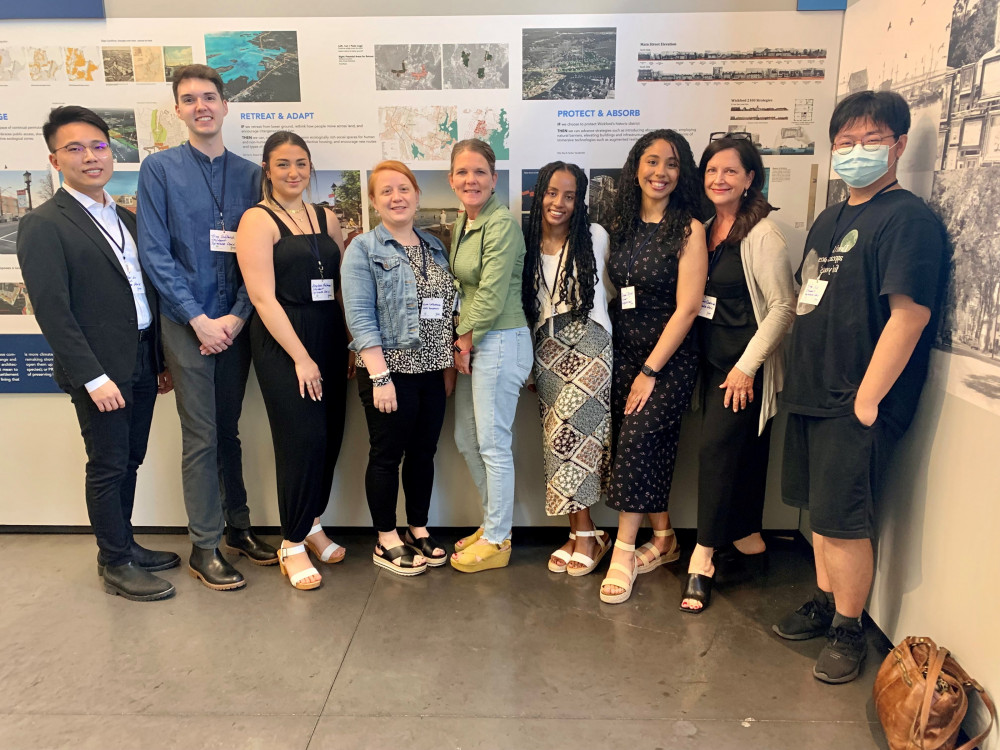 School of Architecture students and faculty at the "Envision Resilience: Designs for Living with Rising Seas" exhibition opening with Rebecca Lamond, supervising planner and Nicole LaFontaine, director of planning and development, for the Town of North Kingstown.In addition, a month-long exhibition entitled, Envision Resilience: Designs for Living with Rising Seas, which features adaptive designs by university student teams that reimagine infrastructure, shorelines and neighborhoods in Rhode Island communities vulnerable to sea level rise, is currently on display at the WaterFire Arts Center, Gallery in Providence, Rhode Island. The free exhibit runs through June 26 and is open Wednesday through Sunday from 10 a.m. to 5 p.m. and until 9 p.m. on Thursdays.

“We are delighted to welcome this exhibition to Rhode Island and to support ReMain Nantucket in this important work,” says Barnaby Evans, executive artistic director of WaterFire Providence. “This show is a wonderfully concrete and engaging extension of the conversations about the environment that we have been hosting here at WaterFire. These exciting proposals will expand our thinking and enrich our perspectives as Rhode Island communities work toward finding the best solutions to coping with sea level rise.”