The School of Architecture and the Syracuse University Libraries will co-host the dedication of the newly renovated and renamed King + King Architecture Library. The event will take place on the third floor of Slocum Hall on Thursday, March 29 at 3 p.m. 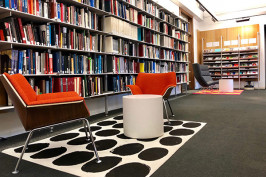 In addition, multiple generations of the King Family are grad­uates of the Syracuse University School of Architecture: Harry A. King ’24; F. Curtis King ’24; Russell A. King ’52; Peter G. King ’77; James R. King ’77; and Alex S. King ’11. Many members of the King family will be in attendance at the dedication.

Communication Access Realtime Translation (CART) will be available for this event. For more information, or if you need an accommodation in order to fully participate in this event, please contact Debra Witter-Gamba at dwitterg@syr.edu. (by Pamela Whiteley McLaughlin)