Design, Digital Technologies and the City: From Image to Building

The Tech Garden in downtown Syracuse, the region’s growing business technology incubator, offers programs, resources, grants, start-up investments, coaching mentorship, and management expertise in light of the regions decline in factories and manufacturing. The organization’s focus is on promoting entrepreneurship by creating incentives for companies to stay in the region. Similar to WeWork, the Tech Garden promotes collaborative space for entrepreneurs to come together, share resources, and discuss ideas.

With the support of Governor Cuomo and the Central New York Regional Economic Development Council, the City of Syracuse has the potential to expand these initiatives to promote entrepreneurship in building construction, technology - both with software and hardware, with low-tech and high-tech solutions, with a new ‘maker-space’ that promotes new manufacturing and construction incentives for the Upstate NY region.

Similar to the Autodesk BUILD Space in Boston, the Tech Garden will be expanded to include a high-tech, collaborative ‘maker-space’ facility comprised of 3D printers, water jet cutting, CNC milling, robotics, computing, as well as traditional form-making spaces, like metal shops, wood shops, ceramic kilns, tube bending, vacuum formers, and other equipment. The Autodesk BUILD (Building, Innovation, Learning, and Design) Space and residency program provides free space and equipment use for building and construction research initiatives by design firms, schools and start-ups around the country. Autodesk is the predominant software provider for the AEC (Architecture Engineering and Construction) industry, ‘with a 200 million–plus users and a 2018 projected revenue of more than $2 billion”. Residents of BUILD Space have access to expertise and training because “free access to software and equipment removes the cost overhead of research and development” for small firms, start-ups and entrepreneurs so they can test new and innovative ideas at half or even full scale.

We will be working on the existing site of the Syracuse Tech Garden in downtown Syracuse and we will be finding new ways to combine their existing program with the new ‘maker-space’ program. 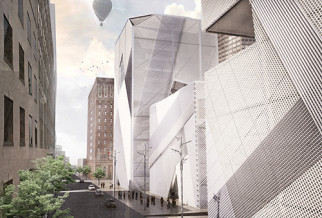 We-Make from its early inception was imagined as a project intended to transform the urbanscape of downtown Syracuse through the introduction of a makerspace. The project started as a material exploration positioned to understand the material qualities at an architectural scale. The initial study investigated how stone was deployed architecturally in a national park right outside Syracuse using photogrammetric mapping software. The initial 2D explorations were used as inspirations for early 3D interpretations. The early 3D interpretations of material qualities led to the creation of concrete models exploring the relationship between solid concrete and void spaces embedded within the mass. This quality of the void-solid relationship was experimented on and utilized as the driver of the project.

The project was first imagined as monolithic masses that appeared obscuring from the outside. The voids were perceived as openings in the monolith where programmatic components can make their appearance. Accordingly, the masses were imagined as three separate volumes differentiated by the extent of public vs private programmatic functions enclosed within them. The solids were carved out by subtracting masses from them. These masses were positioned according to access, natural lighting requirements and continuity. Although the project reveals itself as distinct volumes, the interior constructed void continues throughout these masses, tying them together. 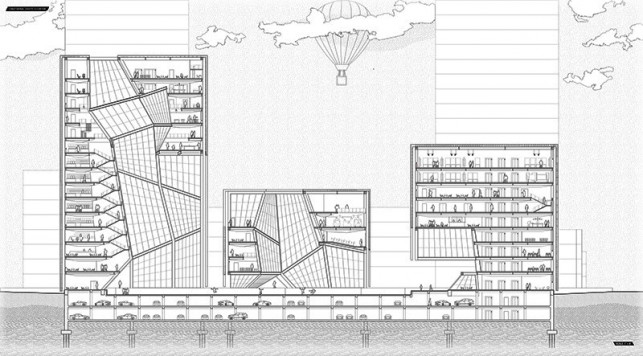 The buildings are supported by two structural systems; an external shell structure created from the solid forms and the other by a structure created by the wrappings of the voids’ surfaces. Bracings were added to provide additional stability to cantilever and other lesser supported conditions.

The façade system is also integrated with the structure. The façade is meant to be dense and thick, attempting to obscure the interior from the outside. The voids in this case become the moments that the building opens up, exhibiting the articulations of program within the mass. The façade is created by a layered mesh that achieves a dynamic density, thickness and sense of obscurity depending upon where it is observed from. 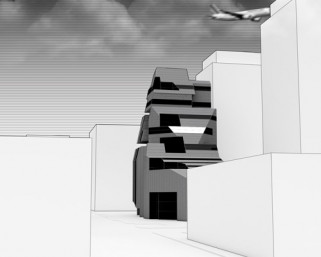 Transformer is a proposal for a makerspace and collaborative coworking incubator, designed to replace the Tech Garden in downtown Syracuse, central New York’s “premier business incubator” assisting businesses and startups that implement technology in innovative ways across a variety of fields.

The building proposal consists of a mixed-use program and is fragmented into three different sections: a left wing, right wing and tower. The left wing consists of programs more readily available to the general public, consisting of mainly shops and restaurants. The tower consists of office space, collaborative space, and recreational space. The right wing consists of several makerspaces, fabrication labs and a gallery which is made to display the research and work being developed within the building. 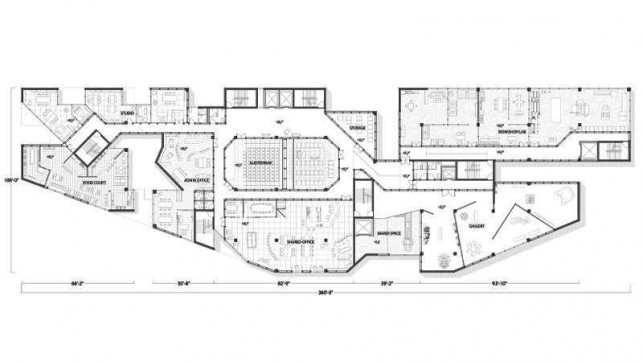 The project is driven and formulated through a formal exercise based on a detailed analysis of “edge conditions” influenced by the built environment surrounding the site. A massing constraint was first developed within the site, considering building heights, lengths, and widths. The overall massing of the building is derived literally from the surrounding buildings themselves, borrowing and distorting the overall massing of at least one building adjacent to the site on each side. Within the massing constraint, the massing forms of the neighboring buildings were manipulated and distorted, and in some cases replicated, through a series of operations such as rotation, mirroring, stretching, and scaling. The resulting voids around and within the building mass create and allow for various access points and spatial breaks between program. 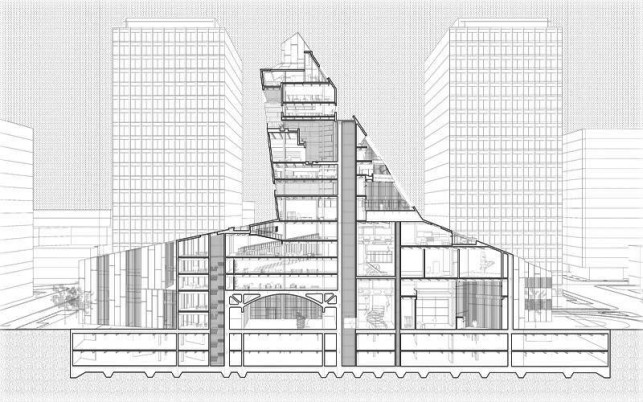 Structurally, the clashing edge conditions between the buildings were used to create shear walls, trying to avoid the uses of steel beams and columns, in order to avoid disruption of the various interior volumes. The shear walls consist of insulated concrete panels.

The façade consists of a steel cladding system, integrated with bands of tinted glass window walls and curtain walls. The bands aim to unify the overall massing, wrapping around its new edges and surfaces – unifying the strange but familiar massing. 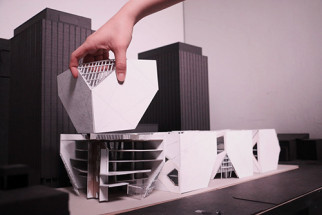 How can we use technology (low or high-tech) to redefine architectural form in the 21st Century that integrates into our contemporary cities? From 3D Printing and robotics to scanning, BIM, and mass customization, technology is playing a critical role in transforming the way in which the built environment of our cities is designed, constructed and occupied. This project asks critical questions of the role of technology in how we design and construct a building: questioning what can and should be done to achieve aesthetic, experiential, and thought-provoking architecture.

At the very beginning of this project, we focused on how different materials and their structural properties can influence the characteristics of a space, utilizing concrete, resin, and foam as well as their combinations to explore spatial relationships. 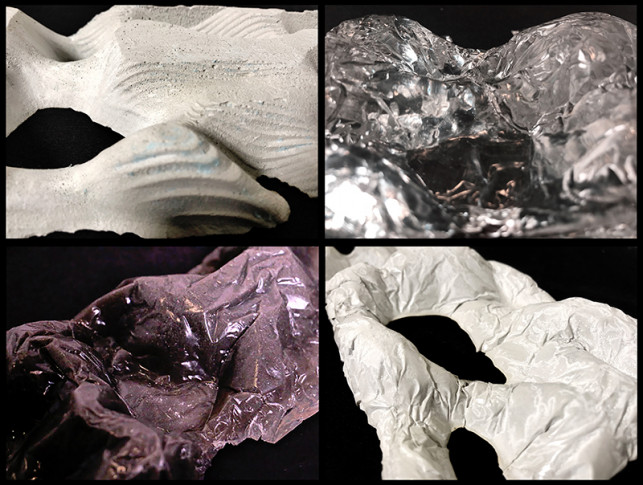 Given the site in downtown Syracuse, we were concerned with the surrounding context and how our formal study can be leveraged for an architectural design. The building’s mass is evenly cut into four parts, which accommodate a public exhibition space, a small robotics center, a large maker space, and offices. Plazas are reserved for public activities by reducing the project’s footprint. It’s not only a working place for entrepreneurs, but also a relaxing place for citizens of Syracuse. 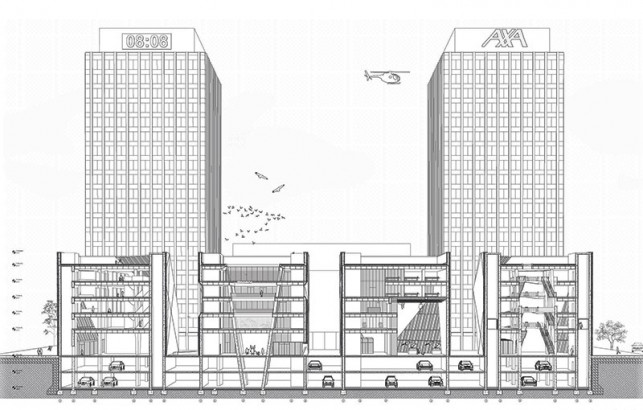 The four buildings have similar concrete shells and have the identical structure system. The constancy of this structural system allows the differences within each building, arising primarily from programming decisions, to take on greater visual and experiential significance.