Established in 2013, the Forum has seen great success and interest world-wide. This year, the event’s theme is “Green and Innovation: New Momentum for Urban Transformation and Development” and will include the first Shenzhen International Clean Energy and Low Carbon Technology EXPO, June 15-20. 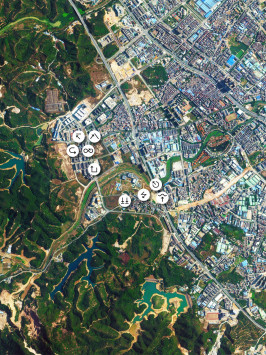 Low Carbon City, Shenzhen, ChinaInterest in the sustainable future of Shenzhen and representation at the Forum is nothing new to Syracuse Architecture—Assistant Professor Fei Wang’s students have previously attended and Wang, himself, has been a presenter of ideas. In 2015, in Syracuse, Wang’s studio students tackled a competition challenge put forth by Shenzhen Institute of Building Research (IBR) to design the city’s Future Low-Carbon Building and Community Innovation Experimental Center (Future Center) in the Pingdi district. Three of Wang’s post-graduate students won second-place—plans moved forward for construction using their design, WESPACE.

At the conference forum, Dean Michael Speaks will present; he will launch a catalogue compilation of Low Carbon City design proposals by Syracuse Architecture students. These same proposals—nine prototypes—are included in this inaugural exhibition. The models serve as proposals for low carbon development of underdeveloped urban areas in China and in the world. They are selected from research and design explorations conducted as part of “Design | Energy | Futures,” a concentrated research + design program that leads to a post-professional master of science (MS) in architecture. All nine were developed with the support of, and in collaboration with, the IBR.

“What has now transpired through our Shenzhen partnerships,” says Dean Michael Speaks, “is that students from our program, at one of the world’s leading architecture schools, are able to bring forth fresh ideas and design motivations and place them on the world stage as a bellwether for solving problems we now face within the urban environment. It’s a very exciting time.”

The Design/Energy/Futures M.S. program at Syracuse Architecture focuses on energy and the built environment with research + design projects ranging across many scales, from urban design to high performance buildings, from landscape urbanism to building material research and product design, and across a range of disciplinary and practice areas including adaptive re-use, real estate development and urban planning.