Representatives from King & King and students in Slocum Hall 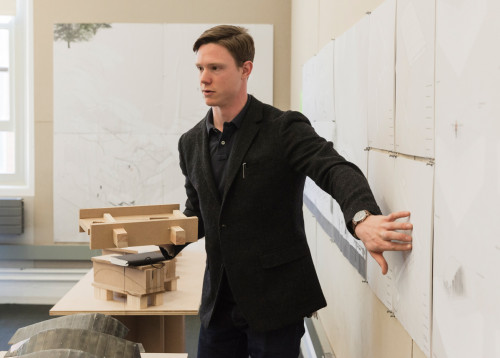 The James Britton Awards for best final thesis projects were given on May 9th during the convocation ceremony in Hendricks Chapel. King & King “Leadership by Design” prizes were awarded on May 4 at the School.

Fifth-year student Steven O’Hara’s “Variable Tectonics: The Project of the Jig” was selected as the Best Thesis. His project “questioned how an emergent or Gothic system of architecture can be applied to contemporary design thinking despite dominant constructional conventions that default to “Romanesque” and maintains that there is a matrix in any fabrication process which includes a design intention, tool, materials, and jigging.” Joshua Graham and Rebecca Soja received Outstanding Thesis awards for their projects entitled “A Field’s Field” and “The Meat You Haven’t Met,” respectively.

The James Britton Memorial Awards were created by James “Jack” Britton Jr. to honor his father, James Britton, a 1925 graduate of the School of Architecture and long-time architect in the Syracuse community. The first Britton Memorial Award was given in 1983 to recognize the best final projects by graduate and undergraduate students in the professional degree programs. Every year since, three thesis project have been chosen by a jury made up of faculty, Syracuse Advisory Board advisory board members, and practitioners.

The King & King Comprehensive Studio “Leadership by Design” competition is an annual event for all students who are part of a vertical studio and have completed their core studies in the undergraduate and graduate professional degree programs. As part of the competition, teams of students present their final studio projects to partners at King & King Architects, as well as faculty members, over the course of the afternoon.

“Since 2004, the partners at King + King have been proud supporters of this competition. We look forward to reviewing the selected projects and recognizing those that exhibit the highest level of research, design exploration, and systems integration,” said Kirk Narburgh, partner at King & King and a 1990 M.Arch graduate.

“For over a decade the King & King Prize has promoted excellence in integrative design. The support and participation of the local profession is a great opportunity for academia and those who practice to see what the other group is doing,” said Larry Davis, associate professor and coordinator of the King & King competition at the School. “Most importantly, the competition promotes outstanding student work at a key moment in the education of the students. It directly connects their understanding of building technology and systems to their intellectual development, illuminating the essential relationship between ideas and technique in architecture.”

The following students were the top King & King Prize recipients: