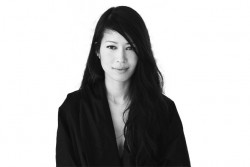 Stella Lee is a founding principal of Bureau V. She has taught architecture at Columbia University and at the University of Kentucky’s College of Design.

Prior to Bureau V, Stella worked at Richard Meier & Partners, Eisenman Architects, and most recently, Asymptote Architecture. As a Senior Designer at Asymptote, Stella led the design of the World Business Center in Busan, Korea, two pavilions for the Guggenheim’s Cultural District of Saadiyat Island in Abu Dhabi, U.A.E., and the Alessi flagship store in New York, which won the 2007 Travel + Leisure Award for Best Retail Space and the AIA Interior Architecture Merit Award.

Stella holds a Bachelor of Arts and a Master of Architecture from Columbia University, where she received the Lowenfish Memorial Award.