Quick links
Syracuse Architecture
Back to Top Back to Previous Page
November 29, 2021
fall 2021

A team of alumni from the School of Architecture has won an award for their project submission in “The Living Museum,” a new architecture competition focused on the design of micro- accommodation units immersed in the Sardinian landscape of the Nivola Museum in Italy. 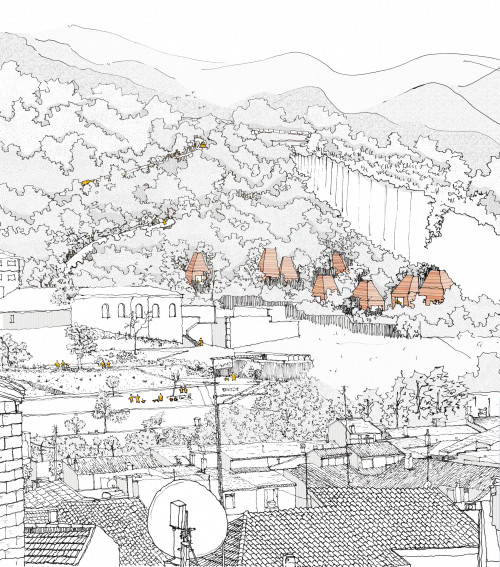 “Casted Cabins” village viewEstablished in memory of Richard Ingersoll, a longtime professor of art and architecture in Syracuse Abroad Florence, and founder and director of TerraViva Workshop, “The Living Museum: Micro-architectures in the Landscape” is part of a series of design competitions organized by TerraViva, aimed at promoting original projects with a conscious vision about environmental and social sustainability.

Created to address the so called “take-away-tourism” that has always been a critical issue for Sardinian small villages and minor museums, the competition asked participants to integrate an accommodation program within the heart of the Nivola Museum complex, situated one hour from the Sardinian coast.

Competitors were to imagine and design creative and unconventional proposals—small-scale structures capable of enhancing the value of the magnificent natural site—to host tourists intent on traveling through the Sardinian inland, as well as the international artists who periodically reach the museum to set up their own exhibitions.

In the search for innovative concepts and original projects, an international jury panel coming from well-known international firms and academic institutions evaluated the submitted proposals. Both the history of Italian sculptor, Costantino Nivola and his works of art, and the natural features of the site, were key factors in the designs of the winning projects.

Influenced by Ingersoll’s research on urban ecology and sustainable architecture, the team of alumni set out to prove that by adding distributed residences to the existing museum complex, it could function simultaneously as an icon for the Orani municipality, as well as an entity separated from its ecological and civic context. 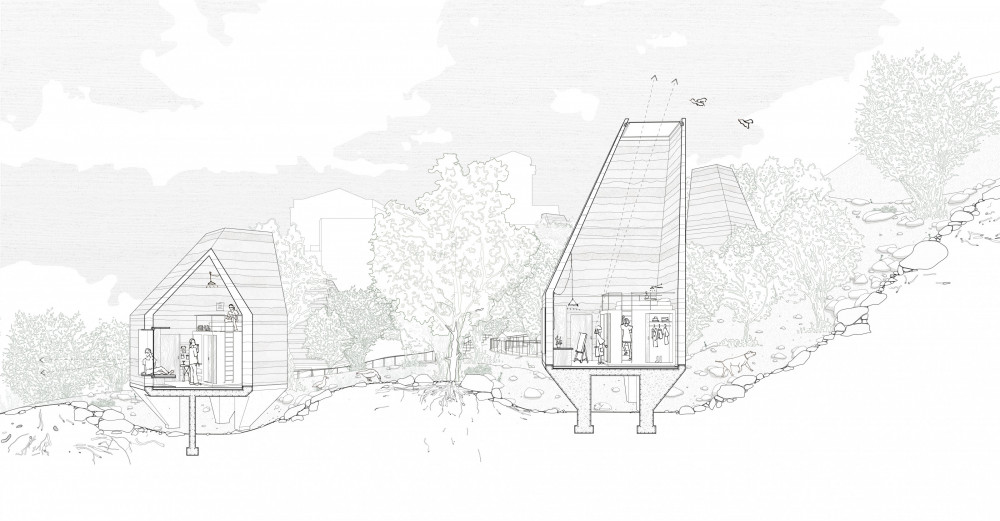 “Casted Cabins” section drawing“Our proposal was intended to honor Professor Ingersoll who challenged and inspired us to expand our conception of the architectural discipline beyond the singular building and toward broader sociological issues,” says Liu.

The team’s project aimed to preserve the surrounding ecology by prudently situating the residences within an olive orchard; project a worthy civic icon, representative of Constantino Nivola’s signature sand-casting technique; and promote cultural heritage by utilizing a design that supports the local masonry economy.

By using rammed earth as the primary mode for achieving conservation ecology, the residences of “Casted Cabins” are erected using predominantly earth removed by on-site excavation, thus bridging Nivola’s artistic legacy given the conspicuous assembly and aesthetic similarities to sand-casting.

The sculpted towering profiles of the residences rise above the surrounding tree canopy formalizing an iconic vista for native Oranians living across the valley, while nimbly weaving between the tight arboreal constraints of the grove. The idiosyncratic arrangement and craft of the residences lends individual character to form, fostering opportunities for guests to experience many welcome surprises during their stay at the Nivola Museum.

“Winning an honorable mention recognizes the significant influence Professor Ingersoll had on us, his students,” says Asoli. “We, and the many architects he taught, continue to carry the lessons he shared, principally among which is the insight that architecture plays a vital role in solving social and environmental issues.”

Visit “The Living Museum” competition results page to view a list of all awarded projects.

All the competitions promoted by TerraViva are open to students, architects, designers, urbanists, artists, makers, activists and anyone interested in the architecture field. To learn more, visit terravivacompetitions.com.