Finalists in international competition to design new museum café within the Everson Museum of Art will make public presentations prior to jury session. 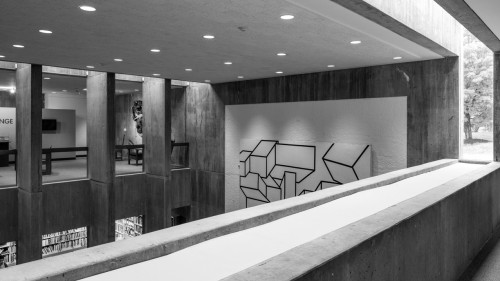 On Thursday, September 19th at 5:45pm the finalists will participate in a public symposium at the Everson Museum of Art moderated by Syracuse Architecture Dean Michael Speaks. On Friday, September 20th, finalists will present developed proposals to a jury of professionals in architecture, arts administration, ceramics, and the culinary arts. The jury will select one firm to receive a commission to complete the new café.

The new museum café will also serve as a venue to showcase and put into use The Rosenfield Collection, a 3,000+ piece functional ceramic art collection gifted to the Everson Museum of Art by Dallas-based ceramic artist and collector Louise Rosenfield. Rosenfeld, along with Kate Nutting, Principal and Managing Member of VIP Architectural Associates; Fouad Dietz, Everson Museum Chair of Buildings and Grounds Committee; owner of Pastabilities restaurant in Syracuse, NY, Karyn Korteling ’81 (Newhouse); and ceramic artist and chef, Britt Thorp will serve as advisors to the jury.

“The jury members are among the most celebrated individuals in their respective fields. Their expertise will be paramount in aiding the museum in selecting the designer of the new café and display system,” states Kyle Miller, Everson Museum Café Competition Director and Syracuse Architecture Assistant Professor.

ABOUT THE JURY MEMBERS

Sean Anderson is Associate Curator in the Department of Architecture and Design at The Museum of Modern Art (MoMA). A Fellow of the American Academy in Rome and the Scuola Normale Superiore di Pisa, he has degrees in architectural design and architectural history from Cornell University, an M. Arch from Princeton University and a Ph.D in art history from the University of California, Los Angeles. He has practiced as an architect and taught in Afghanistan, Australia, India, Italy, Morocco, Sri Lanka and the U.A.E. At MoMA, Anderson manages the Young Architects Program and has organized the exhibitions Insecurities: Tracing Displacement and Shelter (2016) and Thinking Machines: Art and Design in the Computer Age (2017-18).

Aric Chen is Curatorial Director of Design Miami and Professor at the College of Design and Innovation at Tongji University in Shanghai. As a design curator and critic, Chen spent six years as lead curator for Hong Kong’s M+ museum. He’s also served as creative director for Beijing Design Week, and organized exhibition and projects at London’s Design Museum, the Center for Architecture in New York, Experimental Design in Amsterdam, the Saint-Etienne International Design Biennale in France, and the Design Museum Holon in Israel, among others.

Jing Liu is an Adjunct Assistant Professor at Columbia University Graduate School of Architecture, Planning, and Preservation, and co-founder of SO—IL, a Brooklyn-based architecture office that has produced several important buildings iconic of its generation such as the Kukje Gallery in Seoul and the Manetti Shrem Museum of Art in Davis, California. Liu serves on the board of Van Alen Institute, a nonprofit institution that works to enhance the transformative power of design on its cities, landscapes, and regions in order to improve people’s lives. Liu received her education in China, Japan, the United Kingdom, and New Orleans.

Matt Shaw is Executive Editor at AN Interior and The Architect’s Newspaper, a comprehensive source of information on the latest projects and commissions, unfolding politics and debate, and cultural developments in contemporary architecture. Shaw teaches critical writing at SCI-Arc, has worked for the Columbia Laboratory for Architectural Broadcasting (C-Lab), Storefront for Art and Architecture, Architizer, and been published in The Architectural Review, Beyond Domus, and Icon. He wrote and researched two editions of the guidebook “Europe’s Top 100 Architecture and Design Schools” for Domus. Shaw is also Co-director and Co-curator of hot air, a nomadic, volunteer-run architecture organization in New York City.

Oana Stănescu runs her eponymous design studio from New York. Her projects include the collaborative +POOL, a floating, water filtering swimming pool, as well as a wide range of collaborations with Nike, Virgil Abloh, The Office of PlayLab, 2×4, Arup, New Museum, the Storefront for Art and Architecture, Need Supply, Fool’s Gold, and many more. Stănescu’s work has been celebrated in publications such as the New York Times, Forbes, Madame Figaro, Architect Magazine, New York Magazine, Mark, and Time. Prior to establishing her own studio, she was a co-founder of the New York-based practice Family. Stănescu previously taught at Harvard GSD, MIT, Columbia GSAPP, Cooper Union, and the Architectural Association.