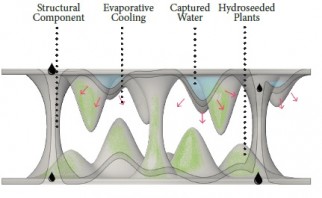 The research focuses on developing a prototype brick which controls the air with evaporative cooling. The fundamental material of this brick is soil, which has a porous surface when it is fabricated. The weeped water particle can be evaporated with passing hot air from outside, which causes a cooling effect. The shape of this brick is designed in order to maximize this function. To be specific, the connected projecting components in a unit act as structural elements, and water can be circulated inside them. Other projections act as vessels by capturing water on the inside. Moreover, a planted surface by using hydro seeding not only enhances the cooling effect but also performs the function as a living wall.

This research is an ongoing project with professor Daekwon Park and a brick manufacturer in South Korea. Eventually, this research aims to propose the prototyped brick unit and develop this unit to be optimized in the context of an architectural project, which can be utilized to solve environmental issues such as air pollution or global warming.

At the very beginning of the research, looking at traditional earthenware which controls the air through micro-hole helps to understand how to make the ceramic product can contain respiration function itself. Plus, Muscatese Evaporative cooling window, is good reference to understand cooling mechanisms from evaporation. Subsequently, this research following the digital and physical experiments to design the cooling brick. Specifically, ceramic 3d printer, equipped at Center of Excellence, Syracuse, NY, will be used to optimize the characteristic of soil as a main material. The expectable effect of the research is to properly adapt this brick to the certain areas where involved the environmental issues mentioned above. 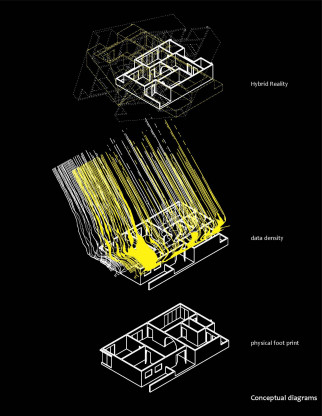 The burgeoning growth of image sharing over social media has created a virtual representation of housing spaces. Such sharing is often subject to various social, cultural and political factors, which create a difference between a physical space and its corresponding representation in the virtual world. At the same time, the politics in the virtual representation, impacts on the physical design of the space. The ways that such politics are rendered through digital social media produce, reproduce, shape, limit and destroy the design of physical space, especially in the vulnerable context of post-colonial housing. To this end, the objective of this research is to investigate the relationship between the physical space and its virtual representation through an extensive analysis of data collected from different virtual sources and through ethnographic exploration at Dhaka, Bangladesh. Based on the experimental augmentation of social media data (extracted from posts like photos or texts) of existing apartments/houses on its physical footprint, this research further aims to map the evolution pattern of subaltern housing in the hybrid reality (virtual+actual) and to generate a set of speculative/reflective designs of housing spaces that will empower the locals to have their voice over the spatial design evolution of their own household.

This research needs two level of data collection to map the hybrid evolution of subaltern housing. First, quantitative virtual data about 5-10 apartments/houses (snowball sampling) is needed to be crawled from social media like Facebook and Instagram to map the virtual footprints of the houses. Second, quantitative and qualitative real world data of those apartments from their owners/tenants in order to map the physical footprints, socio-political context, cultural values etc. The second phase of the data collection process needs an intense ethnographic field research in Dhaka, Bangladesh. This research proposal has been developed and shaped as a part of the courses ARC 650.4 and ARC 650.5 and will continue to develop as my final year thesis in the Fall 2018 semester. To complete the data collection process traveling to Dhaka, Bangladesh in this Summer is essential. I believe, the study and documentation of this on-site design research can contribute to re-conceptualizing housing spaces from a novel perspective in a low-resource context like Bangladesh.

Sophie Fraser-Hafter
Housing of the Netherlands: A model for the redevelopment of housing estates in London? 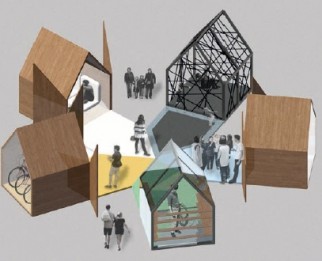 By 2030, over 70% of the world will live in cities, which means that huge quantities of affordable housing need to be built in order to sustain successful cities. London, therefore is going to have to build a huge amount of housing in order to support even more people than it already is struggling to do.

Over the past five years, London has had significant funding cuts in social housing, meanwhile areas surrounding social housing get wealthier and wealthier. This is creating “islands of poverty” across the city as well as forcing those on lower incomes to move further out. As housing stock is continually reduced by the right to buy scheme, it begins to change the estates and the requests from those that live there. We can argue that this condition is actually improving the sociability of some estates, creating greater diversity and income levels and reducing antisocial behavior. However on others, we see an increase in gang warfare, knife crime and anti social behavior.

The waiting list for housing in London is now at the 1.5 million, with limited affordable housing being built across the city. As the housing stock is further reduced, those in need of homes are forced to live in unsuitable temporary accommodation or pay extortionate rent. The London Mayor, Sadiq Kahn, has now committed to building new affordable housing across London, requiring developers to make 35% of new developments affordable. The refurbishment and densifying of estates is part of this scheme, providing opportunities to restore the reputation, rectify past mistakes and add new housing and public facilities.


Akhil Arun, Bharat Krishnan, Erick Sanchez
Never Built New York: The City That Could Have Been

Speculative research within architecture schools revolve around the phrase “what if.” All big things have small beginnings. With the ever-changing dynamic of urban environments that have started heavily relying on technological advancements, it has become extremely easy for us to perceive futures of great ambition. What hasn’t changed is the method of derivation.  For one to truly re-imagine the environment, one must re-imagine the process of imaging. As a group, our interests revolve around the impact and influences that speculative architectural projects could possibly have on the field of built reality. Our intent would be to analyze a series of collections beginning with the Never Build New York exhibition at the Queens Museum in NYC, NY.  Through rigorous documentation and critique of the work, we will try to understand the process in coherence with the result. The exhibition at the Queens Museum showcases 125 unrealized schemes that would have radically changed the skyline of New York City. In many of these projects there lies an idea, an essence that was previously hidden away in museums, architectural offices, out-of-print magazines, and newspapers morgues only to be revealed to the public by exhibition curators Sam Lubell and Greg Goldin. We propose to use this body of knowledge as a platform to try and understand the methodology behind the designs. A careful dissection of each project within the context of New York will help us understand how a singular entity of built work is supposed to function within a network of systems such as New York city. We believe that the knowledge embedded in these projects will help kindle our imaginations and help us better position ourselves within impending certainties.

The aim is simple, to ask ourselves questions such as: ‘how do we translate vertically within a built structure without an elevator or a staircase? How can we re-imagine the most obvious systems  at play within a built environment’. We want to deconstruct and re-imagine the systematic functionality of our urban environment and to do this  we believe that a critique on the methodology of  speculation is required. Never built New York consists of series of projects that would expose us to models and drawings of speculative design products ranging from product design to urban scale environments, allowing us to examine the design processes on multiple scales. Making scalar jumps with a body of knowledge that is this rich and rarely exposed to a public audience would be extremely beneficial to our overall research. Furthermore, we would extend our research by looking through the lens of different mediums, as part of our group is participating in the Liam Young workshop (a workshop that will focus on re-imagining future cities through the medium of film production). We would then hope to culminate this understanding into a project of our own within our ARC 606 studio - Impending certainties | hypothetical futures of architecture.