Yu-Chi Kuo, Sebastien Simonnet
How to Act Around your Crush: Icons 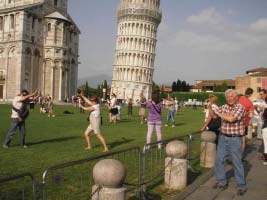 Our research interests lie within tertiary readings of relationships between people and their posts with architectural icons in photographs - as seen above. A primary relationship is one where an individual simply stands in a pose with an architectural icon in the photographic frame. A secondary relationship is one where, as seen in the image, people pose in a direct and interactive relationship with the icon in such a way that this relationship is only seen in the photograph. Tertiary readings, however, as we are proposing, derive from the greater context of the selected icons. For instance, what their political, social or economical intentions were at conception. Intentions that are now neither directly obvious nor simply secondary in nature. 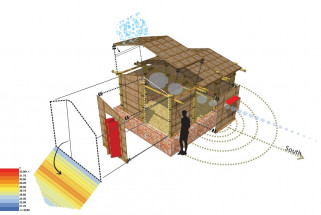 Bangladesh is one of the countries that are most vulnerable to natural disasters. According to UNDP, between 1980 to 2008, Bangladesh experienced 219 natural disasters claiming thousands of lives and causing a damage of over 16 billion USD. During each of these disasters, marginalized communities suffered the most. The coastal poor lose their housing investments every time a major cyclone attacks resulting an extreme poverty. Different government and non-government organizations have been working on Disaster Resilient Housing Development sectors. However, the top-down design tendency of these organizations often fails to address the sociocultural needs of local communities. Negligence to vernacular building technology, local materials, and local expertise, and lack of providence in terms of maintenance have heavily contributed to deficient housing projects, which may barely sustain the cyclones, but fail to respond to the community for the rest of the year.

In such a context, I started studying a fisherman community, which was severely affected by the Cyclone Roanu (May,2016) at Kutubdia Island in Cox’s Bazar, Bangladesh, during my visit there in Summer 2016. Along with the world’s largest NGO, BRAC, and the local people, I started developing design research on an extremely low-cost adaptable modular housing unit. My initial exploration in this fairly understudied area could make a foundational work for sustainable coastal housing system. Building on that, currently I am analyzing the environmental performance of the initially designed housing unit in ARC 622-Building System Design ll course at Syracuse Architecture. I am planning to re-visit Bangladesh this Winter Break to examine the feasibility of the revised design at the real site. I am also looking forward to making one prototype at full scale to evaluate its performance in a local context. I believe the study and documentation of this on-site design research can contribute to re-conceptualizing “disaster resilient” housing from a novel perspective in a low-resource context like Bangladesh.


Yang Song
From Mortise and Tenon to Joinery Driven Design 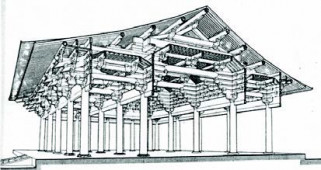 The intent of this research is to propose a joinery-driven performative design method, with the typological and structural studies of traditional Asian wood joinery pavilions as test grounds, and the help of computational and digital-fabricated tools.

Traditional Chinese building methods were known for standardizing and prescrib­ing uniform structural features, therefore ancient Chinese architectures were usually composed of numerous similar elements. Mortise and Tenon, which is also called Sun Mao in Chinese, was the key element connecting and joining each part, passed down and evolved over a number of dynasties. Yingzao Fashi(published in 1103), the first very important building manual, recorded work from generations of builders and craftsmen and collected build­ing information into building standards. Nowadays, wood tends to be more of a decorative finishing than a structural member. Although wood was largely deployed in ancient Chinese architectures, most Chinese architects are not familiar with Sun Mao any more. The application of Mortise and Tenon has migrated to furniture design, evolving in a relative small scale.

However, with the evolution of contemporary technology, computer aided manufacturing and digital fabrication provide wood joinery with more oppor­tunities. The Tamedia Office building in Zurich, Shigeru Ban utilized a multi axis mill to precisely produce each single timber piece. What’s more, the increasing popularity of 3D printing enables furniture designers to have the options to 3D print the joints with a variety of materials. Sun Mao as a series of joinery prototypes, could directly lead to the exploration and development of 3D print­ing joinery.