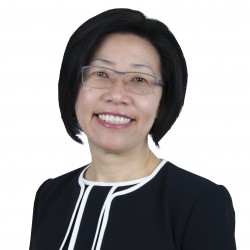 Rosa T. Sheng, FAIA is a principal at SmithGroupJJR, AIA SF president 2018, and founder of Equity by Design, an AIA SF committee. As a licensed architect with 24 years experience in architecture and design, Rosa has led a variety of award-winning and internationally acclaimed projects from the aesthetically minimal, highly technical development of the glass structures for Apple’s original high-profile retail stores, to the innovative and sustainable LEED NC Gold–certified Lorry I. Lokey Graduate School of Business at Mills College in Oakland, California.

She is leading SmithGroupJJR’s new Equity, Diversity + Inclusion Program as a continuation of her work for equitable practice in architecture. Her work has launched a national movement catalyzed by the findings from two pivotal surveys and through provoking discussions in cities such as Boston, New York, Lisbon, Atlanta, Seattle and Philadelphia. Press coverage of her work with Equity by Design includes Architect Magazine, Architectural Record, The Wall Street Journal, The New York Times, TEDxPhiladelphia and KQED/NPR.

Sheng received her B.Arch degree in 1994 from Syracuse University.

About Equity by Design

Fueled by the persistent and striking inequity of representation architectural practice, where women compose only 12–18 percent of AIA members, licensed architects, and senior firm leadership, Equity by Design, a committee of AIASF, was developed as a call to action for both women and men to help realize the goal of equitable practice to retain talent, advance the profession and communicate the value of design to society. The 2016 Equity in Architecture Survey with 8864 respondents and EQxD Hackathon Workshops have sparked much needed dialogue that has resulted in 5 consecutive sold-out symposia, wide spread media coverage and requests for EQxD presentations nationally and beyond.