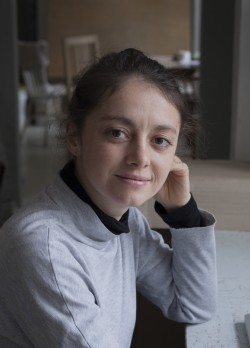 Yolande Gouws aims to create work that is emotionally stimulating across cultures. Originally from South Africa and practicing in Berlin since 2011, she is formally trained as an architect and with five years experience developing artworks, installations and exhibition concepts with Olafur Eliasson, she is able to create works that elicit an emotional and often also a memory response in viewers using simple formal elements.

Currently, Yolandé’s primary medium for artistic expression is string. Being at once 2 and 3 dimensional, string is able to define dimensions and also acts as an ally between the virtual and the real. Through repetition, string can be used to form complex surface geometries or to define three-dimensional space. Yolandé uses string purely in tension, and as such, gravity plays an important role in her work, drawing a parallel between the emotions behind the works and the physical manifestations that are the works. Historically, string plays a huge role in the sophistication of mankind. String woven as warp and weft creates fabric, the oldest of all crafts and arguably, the most celebrated. Metaphorically, a line or a string is often used to represent time. Looking at a collection of lines, it then becomes possible to see multiple times at once. Repetitions, perhaps representing days or cycles, can be observed together. It becomes possible to imagine times as being simultaneous. String is available in seemingly endless materials of myriad colours, thicknesses and textures, each eliciting a different emotional hue from the observer. Artworks are created as emotional expressions that in turn elicit emotion, without semiotics. Instead, formal visual elements, such as color and texture, patterns and proportions are employed by the artist and easily read by the viewer. The art-making process can be seen as an exploration of the experience of intuition semantics and non-meaning, whilst experiencing an emotional response to an aesthetic construct, more simply defined as an intuitive understanding of the artwork through the feelings that the work evokes.