The Getty Research Institute (GRI) recently announced its incoming scholars in residence for 2020-21, including Lawrence Chua, assistant professor in the School of Architecture.

Chua has been awarded a Getty Scholar Grant for his research focusing on transregional histories of utopia and the architecture and urban culture of southeast Asia.

Since 1985, the GRI, an international center for the study of visual culture, has invited scholars, artists and other cultural figures from around the world to work at the institute on projects that bear upon its annual research theme. While in residence, they pursue their research free from academic obligations, make use of Getty collections and participate in the intellectual life of the Getty.

This year, the GRI selected 34 scholars from hundreds of applicants, most of whom will work on projects related to the 2020-21 research theme devoted to “the fragment.” As noted by the Getty, many objects of study survive in physically fragmented forms, and any object, artwork or structure may be conceived of as a fragment of a broader cultural context. Incoming Getty Scholars are invited to address both the creation and reception of fragments, their mutability and mobility, and their valuation and consequence throughout history. 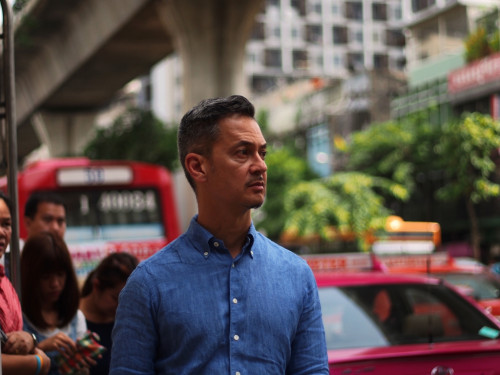 Lawrence Chua Credit: Tim Gerken“This is a competitive and prestigious award that allows me to begin serious work on a subject that has long engaged me,” says Chua. “It comes just as my first scholarly monograph, ‘Bangkok Utopia,’ is being published, so it gives me a precious head start on my next book.”

As a Getty Scholar, Chua will work on his project, “Siam Broken,” which looks at the ways that fragments of Southeast Asia’s medieval and early modern past were studied, imagined and reframed by historians, archaeologists and political leaders in the 19th and 20th centuries.

The historic integration of relics of the Buddha’s physical and doctrinal body from across South and Southeast Asia into the local landscape became a model for incorporating material and rhetorical fragments of “foreign” architecture into the built environment in the 20th century.

By examining how these relics and fragments were used to construct territories, the relationship between cities and the countryside, and the definition of architecture itself, Chua aims to reveal the ways that elements of the classical, medieval and early modern past accumulated new and often contested meanings in the production of a Buddhist modernity.

Due to the changing circumstances of the current global pandemic, Chua will participate in remote seminars devoted to the research theme during the first part of his nine-month residency, where he will have the unique opportunity to share ideas with world-renowned scholars and create a common discourse around the concept of “the fragment.” He also hopes to travel to Bangkok, Thailand, and Siem Reap and Phnom Penh, Cambodia, to spend more time in the field.

“Needless to say, I am delighted to have been selected as a Getty Scholar,” says Chua. “I am looking forward to working with the remarkable archivists and collections at the Getty.”

Chua is a historian of the global modern built environment with a focus on Asian architecture and urban culture. He has been a Marie S. Curie FCFP fellow at the Freiburg Institute for Advanced Studies at the Albert-Ludwigs-Universität, Freiburg, Germany, and a fellow at the International Institute of Asian Studies in Leiden, the Netherlands. He is the author of “Bangkok Utopia: Modern Architecture and Buddhist Felicities” (University of Hawai’i Press, 2021). His writing has also appeared in the Journal of the Society of Architectural Historians, Journal of Architecture and the Journal of Urban History.

For a list of all 2020-21 GRI scholars in residence, visit getty.edu/research/scholars/years/future.html.