Three master of architecture students were recently announced as prize winners in the 2019 Jacques Rougerie Foundation International Competition in Architecture.

The ninth edition of the competition, the Leonardo da Vinci promotion—celebrating the 500th anniversary of his death and 50th anniversary of the Moon’s landing—invited student and professional architects, designers and engineers from all over the world to meet the challenges of rising sea levels or to create the habitats of the future under the sea and in space by proposing bold and disruptive projects.

In fall 2019, School of Architecture assistant professors Amber Bartosh and Daekwon Park co-taught “Impending Certainties,” a graduate studio combining Bartosh’s interest in augmented and virtual reality with Park’s interest in materials research. Inspired by the competition and prediction that 10 billion people will populate Earth by the year 2050, the studio took on the challenge of engaging both the impending certainty that technology will continue to inform and adapt our environments while simultaneously speculating on the hypothetical futures of architecture as a result. 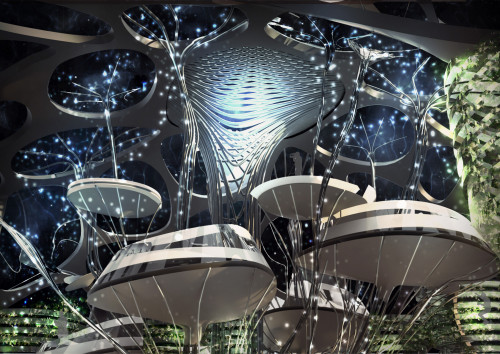 Interior perspective of “Lavatopia,” a closed-loop habitat capitalizing on water.Students submitted projects to the competition that were located in or on the coastline of the Earth’s oceans or in outer space. The futuristic designs ultimately proposed new forms of habitat, mobility, infrastructure and, consequently, new forms of human habitation.

Haerim Park ’21 (M.Arch) and Ruohan Zou ’21 (M.Arch) won the prestigious Grand Prix award in the category Architecture, Design and Technology for Space for their entry, “Lavatopia”—a closed-loop habitat capitalizing on water. Addressing the third phase of “Lunar Village,” a global project spearheaded by the Moon Village Association to establish a permanent lunar base in space within the next decades, Lavatopia utilizes a lava tube skylight and water ice found within the lava tubes to create a cyclical water filtration system to preserve one of the moon’s most precious resources. 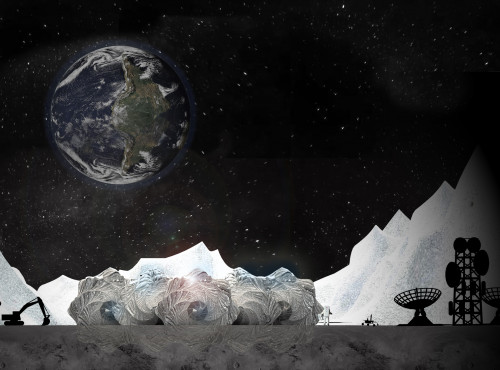 Front elevation of “Lunar Exemplar," a project creating 3D printed prototype shelters on the moon.Monisha Arnold ’22 (M.Arch) was awarded a Focus Prize award for her project, “Lunar Exemplar,” which was judged as the best entry concentrating on the “Lunar Village” in the space category. “Lunar Exemplar” proposes to make the dream of inhabiting the moon real by creating 3D printed prototype shelters that use the moon’s resources to create protective, self-sustained, livable and unique environments.

“We’re so happy for our students; the work they’ve undertaken in our design futuring studio shows their abilities to grapple with the unknown—but perhaps not so distant—futures our profession will be called upon to address,” says Brian Lonsway, associate professor and chair of the School of Architecture graduate program.” Our graduate curriculum revolves around the ‘next-generation professional’ and the tools and techniques they’ll need to bring into the world; these awards affirm both the students’ and instructors’ clear investment in these innovative ways of thinking.”

An awards ceremony took place at the Institut de France (Paris) on Jan. 22, 2020. Each of the nine competition winners received a financial award along with the support in furthering their projects’ development with the help of the professional network of the Jacques Rougerie Foundation- Institut de France.

Created in 2009 by visionary architect Jacques Rougerie, the Jacques Rougerie Foundation Space and Sea Generation—housed by the Institut de France—aims to support architectural, educational, cultural and artistic projects. Its ambition is to encourage the creativity and passion of young architects, engineers and designers to promote the development of particularly innovative, bold and promising biomimetic projects for our future lifestyle, linked to the littoral, marine, submarine and space worlds in order to meet the current challenges of reconciling man and nature, in a sustainable way.

Since the creation of the competition, more than 8,000 applications from 135 countries have been received. All submitted projects are eligible for inclusion in the Jacques Rougerie’s Foundation International Database. Free and accessible to everyone, the database lists a wide range of architectural projects related to the sea, space and the sea level rise.