Quick links
Syracuse Architecture
Back to Top Back to Previous Page
January 06, 2020
the architect's newspaper

Syracuse Architecture was well represented in the 2019 Best of Design Awards, The Architect’s Newspaper’s (AN) unique project-based awards program that showcases great buildings, building elements, interiors, and installations to an audience of over one million readers.

Projects from School of Architecture alumni and faculty were declared winners, including earning the esteemed Building of the Year award.

Entrants were invited this past fall to submit completed works in 47 categories that reflected AN’s editorial coverage, as well as the interests of the newspaper’s readers. This year’s competition proved to be the largest to date for AN, with more than 800 submissions from firms big and small across every corner of the North American continent.

Awards were given to everything from completed commercial and residential buildings to public and urban design projects; from interiors and small spaces to exhibition design and temporary installations; from research initiatives to architectural representations, and beyond. 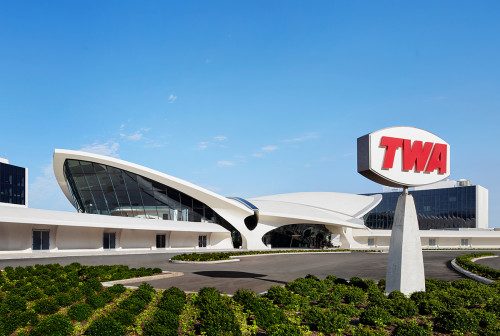 Building of the Year: TWA Hotel by Beyer Blinder Belle & Cooley Monato Studio (David Mitchell)Syracuse Architecture Board of Advisors chair, Lea Ciavarra G’95 (MArch) and her firm, Lubrano Ciavarra Architects, along with Beyer Blinder Belle and Cooley Monato Studio, won the Building of the Year award for “the sensitive restoration and reactivation of Saarinen’s masterpiece”—the TWA Hotel at JFK Airport.

“The original is an architecture of optimism,” says Madrid III. “The rebirth of the project celebrates that. That is extremely needed and refreshing in these times.”

Syracuse Architecture Assistant Professors Molly Hunker and Gregory Corso, co-captains of SPORTS, received an Honorable Mention in the Urban Design category for their project, City Thread, which transformed a formerly unused alley in downtown Chattanooga, Tennessee into a vibrant public space. City Thread was also previously named a winner in two categories for the 2019 Architecture MasterPrize.

For a full list of winners and honorable mention profiles, visit archpaper.com/2019/12/2019-an-best-of-design-awards.