On Sunday, May 12, students were officially awarded their degrees at SU Commencement in the Carrier Dome. 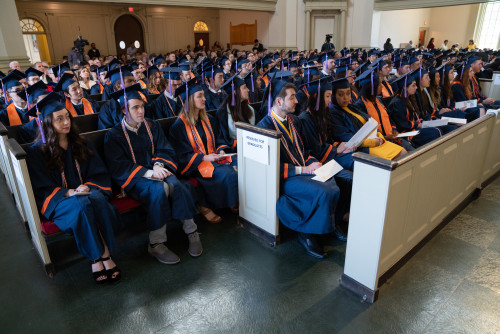 Class marshals Caroline D. Barrick and Ethan Russell-Benoit led the procession in a wonderful celebration of academic achievements of the Class of 2019 at Hendricks Chapel on Saturday, May 11.

We were joined this year by J. Michael Haynie, Ph.D., Vice Chancellor for Strategic Initiatives and Innovation; Barnes Professor of Entrepreneurship; IVMF Founder & Executive Director as our Convocation speaker. Vice Chancellor Haynie delivered the School’s convocation address and gave a unique and important perspective as a client and collaborator of the School of Architecture.

In addition, our beloved Connie Caldwell received the Dean’s Citation this year for her service and dedication to career placement for SoA students.

On Sunday, May 12, students were officially awarded their degrees at SU Commencement in the Carrier Dome.

Citation for Excellence in Thesis Design