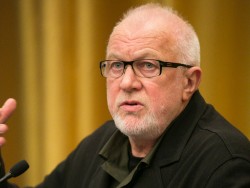 Michael Hays is Eliot Noyes Professor of Architectural Theory at the Harvard University Graduate School of Design and Associate Dean for Academic Affairs, as well as interim chair for the Department of Architecture. Hays joined the Faculty of Design in 1988, teaching courses in architectural history and theory.

Hays has played a central role in the development of the field of architectural theory and his work is internationally known. His research and scholarship have focused on the areas of European modernism and critical theory as well as on theoretical issues in contemporary architectural practice. He has published on the work of modern architects such as Hannes Meyer, Ludwig Hilberseimer, and Mies van der Rohe, as well as on contemporary figures such as Peter Eisenman, Bernard Tschumi, and the late John Hejduk. Hays was the founder of the scholarly journal Assemblage, which was a leading forum of discussion of architectural theory in North America and Europe. From 1995 to 2005 he was Chair of the PhD Committee and Director of the GSD’s Advanced Independent Study Programs. In 2000 he was appointed the first Adjunct Curator of Architecture at the Whitney Museum of American Art, a position he held until 2009.