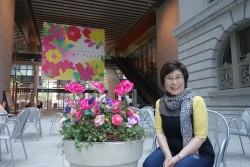 On August 6, 1945, when Keiko Ogura was 8 years old, she was exposed to the atomic bomb 2.4km away from the hypocenter. She graduated from Hiroshima Jogakuin University in 1959. In 1962, she got married to Mr. Kaoru Ogura, who was the director of Hiroshima Peace Memorial Museum as well as a secretary general of Hiroshima Peace Culture Foundation. He was engaged in the promotion of A-bomb exhibitions outside Japan. After her husband’s death in 1979, she began working for Hiroshima herself and deepened international exchanges with writers and journalists and became an interpreting coordinator for peace-movement visitors from abroad.

Since 1990, when she started a planning company with global-minded proposals and designs for governments and corporations, she has supported numerous visitors from abroad and international peace conferences. Also, as an A-bomb survivor herself, she often appears in the worldwide media.

Meeting more nuclear victims outside of Japan and exchanged experiences