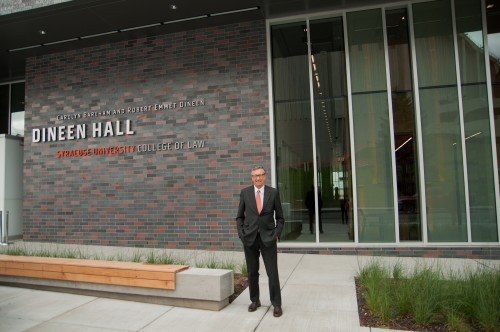 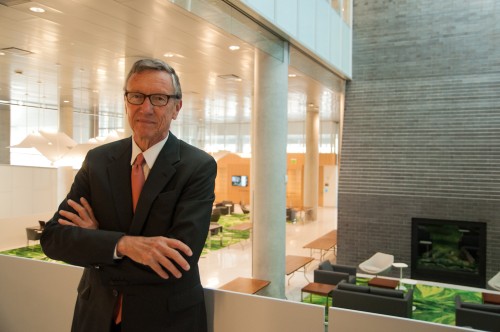 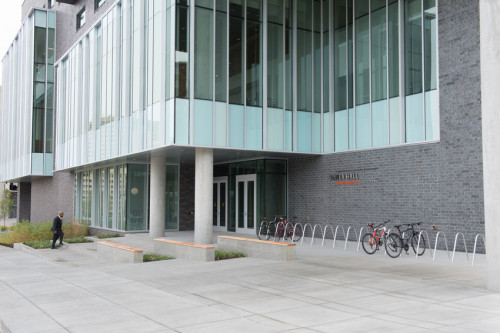 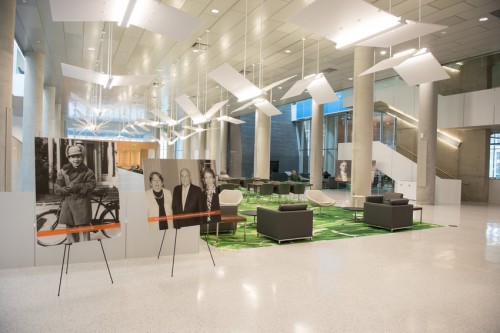 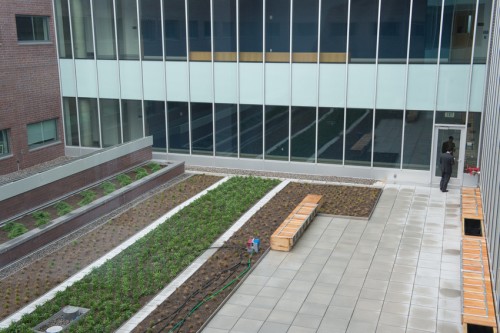 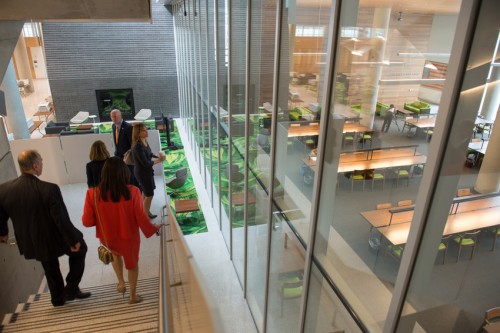 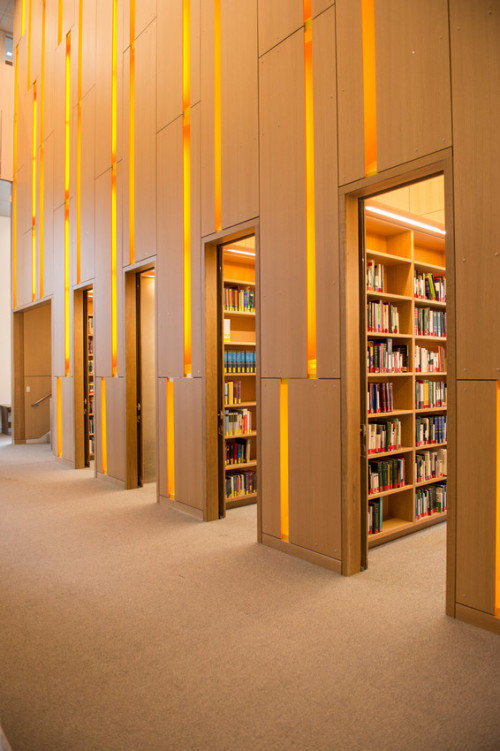 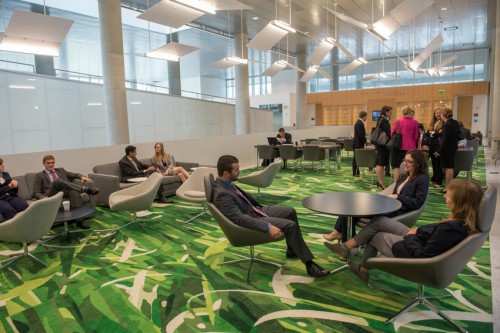 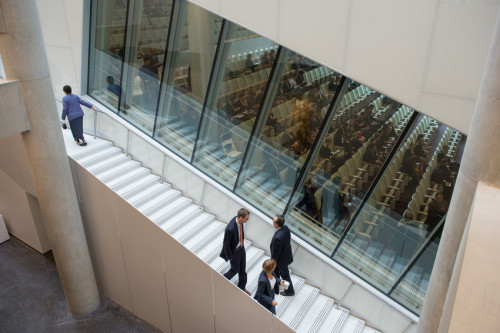 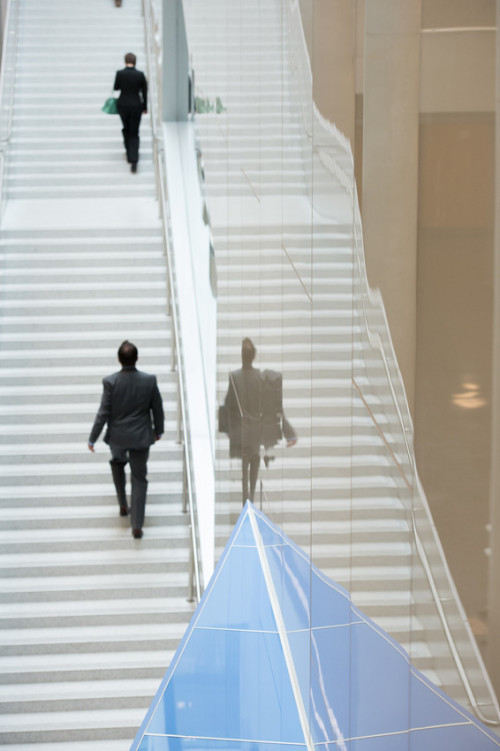 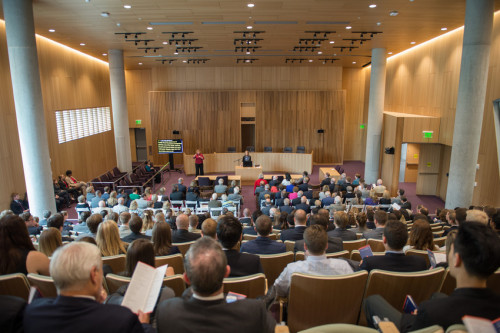 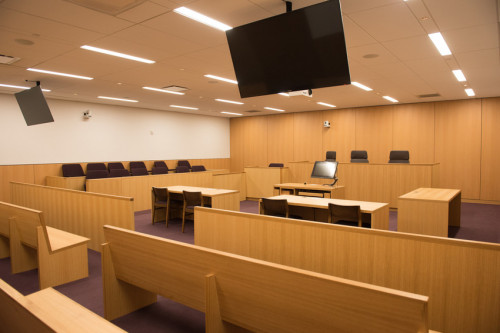 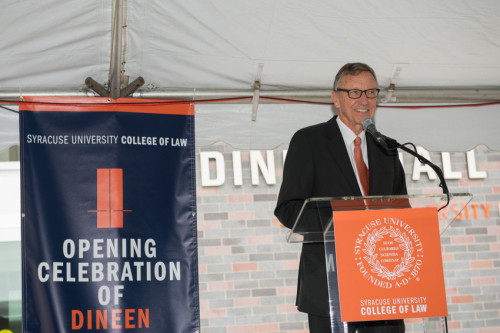 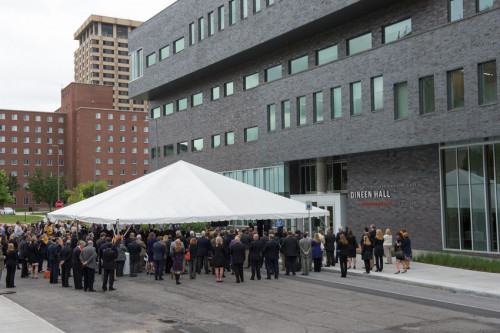 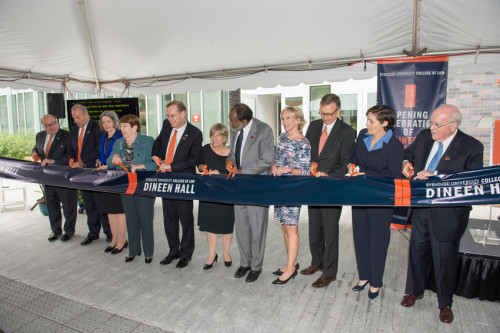 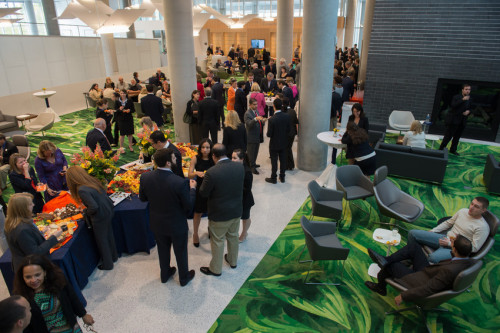 That’s just what Syracuse Architecture alumnus Richard Gluckman has done with his 2006 renovation of The Warehouse in downtown Syracuse and his latest architectural venture, Dineen Hall, home of the new College of Law on West Campus.The project was announced in June 2010 and broke ground in May 2012. Like Gluckman’s last project with the University, things came together quickly.

This five-story, 200,000 square foot facility has already been named the 25th “Most Impressive Law School Building in the World” by Best Choice Schools, joining some of the most innovative and distinctive structures in the field including Indiana University, Penn State, and Baltimore University. It’s also LEED Gold certified. Law faculty, staff, and students celebrated the official opening of the building with Gluckman on September 12.

I sat down with the internationally celebrated architect of Gluckman Mayner Architects to learn the details behind the project.

Why did you decide to take on the project?
RG: Every architect welcomes challenging commissions and what led to my being selected was partly my engagement with the University and the School of Architecture. My last collaboration with the School was with The Warehouse nearly ten years ago. The schedule and budget were very aggressive (nine months) but it was a fast, collaborative and cooperative process – one of the fastest projects we’ve ever done. After that, we began doing studies for the law school renovation and addition.

What elements did you and the School want to incorporate into the new site that were previously missing from E.I. White Hall and Winifred MacNaughton Hall?
RG: The law school wanted a library, a celebratory space, courtrooms, new teaching spaces, and offices. We spent a lot of time with planner, Shepley Bulfinch, who vetted our program through further analysis. Our program was in constant review. We were trying to figure out how the building would be predesigned.

We spent months traveling to other law schools such as Marquette, Villanova, Columbia, and San Diego to talk informally about the nature of their libraries, the relationship between the classrooms, meeting areas, and offices. We wanted to make sure our building had a lot of spaces for informal interaction between faculty and students. The celebratory space is the giant version of this concept.

You are well-known for bringing natural light into your designs. How does Dineen Hall accomplish this idea?
RG: Carolyn Dineen reminded me the other day that Syracuse is typically dark for five to six months. Light is really important. We pulled the building apart to create these deep slots. The entire celebratory space and the library are lit up by skylight. From the ceiling to the ground floor, there is light.

What other reasons were there for creating a brand new building?
RG: One of the benefits is that an addition on the old building, which is built in a linear fashion, wouldn’t have been as centralized. The heart of the school – the celebratory space, the courtroom, and the library – is essentially in the same room. The courtroom is, to us, the iconic element of the College of Law. We wanted it to be front and center, literally and figuratively transparent so that it’s accessible both visually and physically. We pushed it out to the facade because we noticed the pitch of the street matched the pitch of the auditorium. So we tilted the box and you can see deep into the building.

The School is very industrial-looking, minimalistic, and stylish. Do you think the design reflects the style of your firm?
RG: We really work from the inside out with the plans and don’t conceive of the building from the exterior. It’s the result of careful manipulation of both the functional and spacial opportunities that we generate. An all glass building wouldn’t make sense in Syracuse. It’s about context. The context here is the Carrier Dome, the hospitals, the parking garage, Lawrinson and Sadler Halls. These large edifices are all fairly mute. So we wanted to establish a strong image and form for the new west campus. That’s why the building is darker and not brick red. We wanted to give it a quiet presence. We did that with fairly subtle, formal moves on a nine-square grid.

The building is, in a sense, in contrast to its surrounding context. A lot of the same strategies of movement and form are in this project that relate to museum projects as well. There’s the dynamic space of the public spaces and there’s the stoic, more meditative spaces of the classrooms.

Syracuse University is undergoing so many physical changes. How do you feel about the changes currently happening to your alma mater?
RG: It makes me extraordinarily proud and gratified. This campus has improved so much since 1971 and I’m really proud to be part of its next phase. Anything that draws the city and the hill closer together is good. If this is a little tiny step in that direction, then that’s great.

Both the legal and architecture professions are going through similar growing pains, challenged by a changing economic climate and how that affects teaching in these professional fields. The hope it that Dineen Hall accommodates the future shifts in teaching and practicing law. Good design has the inherent flexibility to respond to these changes.


Fun fact: Dineen Hall has 4,385 light fixtures including hanging bird lights in the celebratory space that also resemble flying books. Gluckman’s inspiration for this design came from a project he did for an elementary school. “If it’s good enough for second graders, it’s good enough for law students.”

Upcoming event: A townhall style meeting will be held in a few months to discuss the functionality, accessibility, and success of Dineen Hall.

More on Richard Gluckman: He is a 1970 graduate of Syracuse University’s School of Architecture and its graduate program of 1971. After managing his own firm for over 10 years, Gluckman joined David Mayner in 1998 to create Gluckman Mayner Architects. He is internationally known as “the Artist’s Architect,” recognized for his work on arts-related spaces including the Andy Warhol Museum (Pittsburgh), the Georgia O’Keeffe Museum and Study Center (Phoenix), and the Museo Picasso Malaga in Spain. Gluckman is currently working on museums in Hangzhou and Shanghai, China. He has been a visiting critic at Harvard, Syracuse, and Parsons. He also sits on the advisory board of the Syracuse University School of Architecture.