“LESS IS…” will be on exhibit beginning Thursday, Sept. 8, in the Marble Room on the first floor of Slocum Hall. The exhibition represents the culmination of a yearlong design research and teaching effort conducted at the School of Architecture by Leen Katrib, the 2021-22 Harry der Boghosian Fellow. 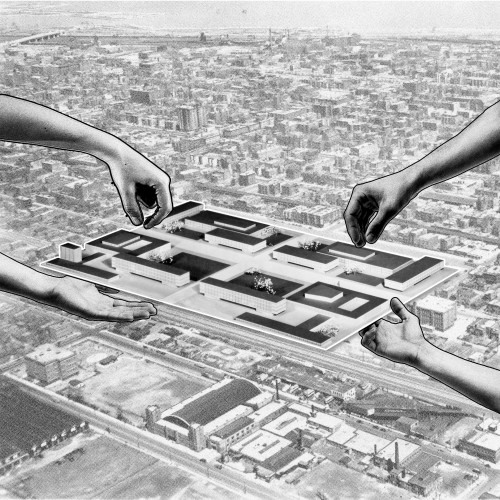 Throughout the 2021-22 academic year, Katrib, the school’s sixth Boghosian Fellow, has taught an architecture studio and two professional electives focusing on her research to deconstruct the myths surrounding Mies van der Rohe’s proposal for IIT’s post-WWII modernist campus expansion, as well as organizing “Debris, Constellations and Counter-Histories,” a virtual symposium that convened a cross-disciplinary group of scholars and practices whose work deconstructs “official” historical narratives and reconstructs counter-histories.

“Leen Katrib’s symposium, studio and seminars were among the intellectual and design highlights of this last school year in Slocum Hall,” says Michael Speaks, dean of the School of Architecture. “Now, in this exhibition, she brings all of that work and research together to offer an incisive critique of university planning and its enlightenment pretensions and a corrective to established Miesian historiography.”

In collecting and reconstructing materials that are not included in “official” Miesian historiography, Katrib’s exhibition contributes to a counter-historiography that highlights Miesian modernism’s entanglement in social, racial and bureaucratic realities. More specifically, Katrib seeks to highlight the ways in which IIT not only shaped subsequent discursive and pedagogical agendas in architecture, but also how it commenced a pattern of post-WWII university campus expansions into vulnerable neighborhoods that continue to this day.

“LESS IS…” deconstructs Mies’ 1941 flattened photomontage of the campus expansion proposal to reveal the complex and co-authored mechanics behind the campus expansion and the material record that was literally, figuratively and necessarily suppressed—all in the name of progress. The vehicle of that suppression was the tabula rasa, which was enacted by an “apolitical” architect intent on creating an “apolitical” architecture. Taking its cues from the very spatial and ordering systems that govern Mies’ master plan—the 24-square-unit grid and flattening—”LESS IS…” reveals the very materials, narratives and people that were suppressed, hidden and covered over by the creation and maintenance of the Miesian myth adopted as official history.

Ultimately, “LESS IS…” “looks backward” to offer a corrective to those architects “looking forward” to future university campus expansion projects.

“The culminating exhibition marks the beginning of longer-term research I’m conducting to trace a pattern of past and ongoing university campus expansions into vulnerable neighborhoods across the United States,” says Katrib. “Many have adopted similar mechanics and alliances established in IIT’s post-WWII expansion—in some cases, they were led by Mies’ very own disciples. Ultimately, in challenging the official histories of these expansions, I hope to offer a corrective to architects working on ongoing and future campus expansion projects.”

The Boghosian Fellowship at the School of Architecture was established in early 2015 in memory of Harry der Boghosian ’54 by his sister, Paula der Boghosian ’64. Designed to give faculty members, early in their careers, the opportunity to spend a year developing a body of design research based on an area of interest while teaching, the one-of-a-kind program has helped the school attract the best and the brightest emerging professors.

“I’m grateful for the time and space the Boghosian Fellowship afforded me to conduct research and to design research-integrated seminars and studios,” says Katrib. “The support and guidance I received throughout the year from Dean Speaks and faculty has been instrumental to the development of the work.”

Katrib will give a gallery talk on Thursday, Sept. 8, at 6 p.m. in Slocum Hall’s first floor atrium. A public reception will follow.