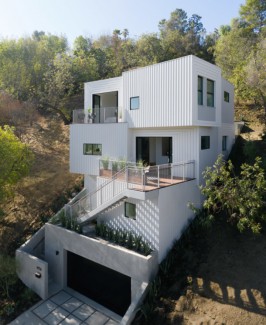 David Freeland has been principal at FreelandBuck in Los Angeles since 2010. He is also a faculty member at Southern California Institute of Architecture and has taught design studios at University of California, Los Angeles (UCLA) and University of Southern California. From 2006-2012 Freeland taught at Woodbury University where he was instrumental in developing the FabLab and teaching fabrication and computation. With over 15 years of experience practicing architecture, he has worked on award winning residential, commercial, urban, and institutional projects with FreelandBuck, as well as Michael Maltzan Architecture, Roger Sherman Architecture and Urban Design, RES4, and AGPS. Freeland holds a BArch from the University of Virginia and an MArch from the UCLA Department of Architecture and Urban Design. His research and practice focuses on the spatial potential of patterned systems.

Brennan Buck has been principal at FreelandBuck in New York City since 2010. He is also a critic at the Yale School of Architecture. Prior to teaching at Yale, Buck worked for Neil M. Denari Architects, Johnston Marklee & Associates in Los Angeles, and Walker Macy in Portland, Oregon. He has taught at the University of Pennsylvania, Syracuse University, the University of Kentucky, and the Royal Danish Academy in Copenhagen. From 2004-2008, he was assistant professor in Studio Greg Lynn at the University of Applied Arts, Vienna. Buck received a B.S. from Cornell University and an MArch from the UCLA Department of Architecture and Urban Design. His writing on technology and representation within the discipline of architecture has been published in numerous academic and professional journals.