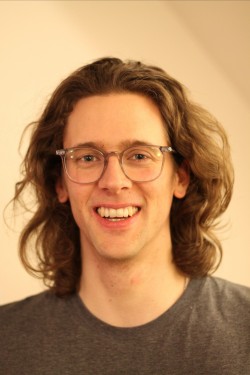 William Stewart is a PhD student in Princeton University’s German Department. Before coming to Princeton, he studied for a master’s at the Freie Universität Berlin and worked for a number of years as a researcher in the Berlin studio of Danish-Icelandic artist Olafur Eliasson.

His work focuses on cultural and intellectual histories of industrial modernity. His interests orbit the specific culture of capitalism and the changes that culture has undergone in the last century. He works on the roots of neoliberalism and the social and political conditions of its possibility; rise of forms of global intelligentsia in post-war Europe; and changing paradigms of the ‘real’ as a barometer for modernism, post-modernism, and (perhaps) post-post-modernism.

He has given papers at Princeton University, the CUNY Graduate Center, and the Humboldt Universität zu Berlin on topics including informational aesthetics of 1970s German conceptual art of Hanne Darboven and Bernd and Hilla Becher; brutalist aesthetics in the early films of Harmony Korine; and notions of distributed authorship in Glenn Gould’s theories of recording. His dissertation focuses on the rise of globalized consciousness in German letters after World War II, in particular in the work of Ingeborg Bachmann, Hanne Darboven, Hans Magnus Enzensberger, and Uwe Johnson.