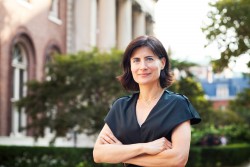 Amale Andraos is Dean of the Columbia University Graduate School of Architecture, Planning and Preservation. Andraos has taught at numerous universities including the Princeton University School of Architecture, the Harvard Graduate School of Design, the University of Pennsylvania Design School and the American University in Beirut. Her recent design studios and seminars have focused on the Arab City, which has become the subject of a series of symposia entitled “Architecture and Representation” held at Studio-X Amman in 2013 and on campus in New York in the fall of 2014. Her publications include the recent 49 Cities, a re-reading of 49 visionary plans through an ecological lens, Above the Pavement, the Farm!, and the forthcoming Architecture and Representation: the Arab City.

Andraos is a co-founder of WORKac, a 25-person architectural firm based in New York that focuses on architectural projects that re-invent the relationship between urban and natural environments. WORKac has achieved international recognition for projects such as the Edible Schoolyard at PS216 and PS7, the Centre de Conferences in Libreville, Gabon, the New Holland Island Cultural Center in St. Petersburg, and the Beijing Horticultural Exposition Masterplan and Pavilions.

Andraos received her Masters Degree from the Graduate School of Design at Harvard University and her B.Arch from McGill University in Montreal.