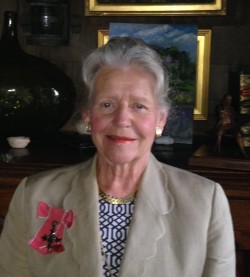 Anne Keigher ’60, MBE, FRSA, ASID, AIA Emeritus. Anne’s illustrious career spans from the United States to England and Kuwait. She founded Keigher Interior Designs and started designing Hyperbolic Paraboloid structures for 100 FHA homes, all withstood Hugo, during a three months’ time span in St Croix, while husband Dick was in Law school. During the next 25 years she lived in Rochester and Bronxville, N.Y., Pittsburgh, Chicago, Kuwait and then London for 20 years, and practiced as an architectural consultant in all of the above. Anne is an active Board Member with ASID and an original member of the 1st AIA international Chapter in London. To new and often strange surroundings, Historic Preservation has always been her major interest and was what she focused on in London. Successful practice with private clients for the first three years, ensued her lead in the Benjamin Franklin House as the Honorary Conservation Architect, a position that started in 1990 to present. This required full time fundraising and project management beginning in 1997 through 2006. It began with the structural repairs phases ending with the completion of the timely and on budget conservation of the Benjamin franklin’s only existing house c.1740.

Other London interests included Fellowship at the Royal Society of Arts where Franklin was the second fellow in 1753, and membership in the Pilgrims, UK. In 2008 she was awarded an Honorary Member of the British Empire (MBE) for her dedication to the preservation of the Benjamin Franklin House. She and husband Dick repatriated to America in 2006, and are still living in and preserving 18th century residences in Charleston S.C (1754), and Little Compton R.I. (1700), focusing spare time with the Historic Charleston Foundation Advisory Board, The Charleston Library Society, and of course her family.

One of Anne’s most memorable events was receiving her Bachelor of Architecture Degree in 1960 from Syracuse University School of Architecture, followed by her marriage to Dick Keigher and then the birth of Michael Prescott and Rachael Squire.​