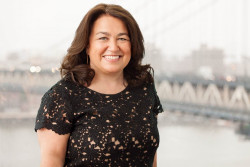 Lea Ciavarra graduated from Colgate University in 1991 with a Bachelor of Arts in Mathematics and a Minor in Art & Art History. She received her Masters of Architecture in 1995 from Syracuse University Graduate School of Architecture where she was honored with the James Britton Memorial Thesis Prize and a Graham Foundation Grant for a student-organized symposium. She was the recipient of the “Dean’s Distinguished Alumni Award” from Syracuse University in 2005, where she has served on the School of Architecture’s Advisory Board since 2001. Ciavarra is licensed to practice architecture in the states of New York, New Jersey, Connecticut, Rhode Island, Maine and Vermont. She is a LEED Accredited Professional.

Ciavarra’s meticulous attention to materiality and quality craftsmanship elevates the design of her housing, education and residential projects, which have recently been recognized by “Interior Design’s Best of Year Award” and “NYC X Design”. Her own home was also selected to be part of openhousenewyork’s 10th Anniversary Weekend featuring designers’ homes in October 2012. Lea’s commitment to community and education runs deep within her professional work. She began her career in the profession as a full-time faculty member at Syracuse University School of Architecture (1995-1997), during which she served as Director of the Pre-Architecture Program in Florence, Italy. Her commitment to the profession is reflected in her continuing academic activities, having taught design studios at New York Institute of Technology, Parsons School of Design, New Jersey Institute of Technology and Syracuse. Ciavarra has lectured at Florida International University School of Architecture, Colgate University, Dalhousie University and Packer Collegiate Institute.

Lea’s service to the KIPP New Jersey Friends of TEAM Board and the George Washington Memorial Park Board of Trustees complements her work in the Charter School sector, leading such projects as the Harlem Day Charter School in Manhattan sponsored by Sheltering Arms Children’s Services, the non-profit Rising Ground’s Biondi Elementary School Feasibility Study, and the new construction of a 50,000sf K-8 charter school for Grand Concourse Academy in the Bronx, developed by the Turner-Agassi Charter School Facilities Fund.

Co-founded in 1999 by Ciavarra and Anne Marie Lubrano, LUBRANO CIAVARRA Architects is a fully women-owned and operated Brooklyn-based architecture and design firm. The firm’s work includes all scales of residential, commercial and cultural projects in which they address the contemporary need for spaces supportive of concurrent identities. In each project, they incorporate “coded” elements – either through the use of color, legible building elements, or other visual signifiers – to reveal spatial networks. The firm’s belief that the best architecture can benefit an entire community is reflected in each of their projects. Design innovation comes with conceptual clarity.

The firm’s work has been published in “Architectural Digest”, “Interior Design” and “The Real Deal” among other publications, and was the recent recipient of an AIA BQDA Award for their Greenpoint Condominium project. The firm was also ranked 33 on “Interior Design’s” PowerGrid NYC 50 in September 2018 – the magazine’s annual report on New York’s real estate scene – for their recent work among others at the affordable housing complex Taino Towers in East Harlem, and for their role as Design Architect at the TWA Hotel at JFK, a restoration and addition to Saarinen’s mid-century modern landmark Flight Center building.