Quick links
Syracuse Architecture
Back to Top Back to Previous Page
May 18, 2018
convocation Rosa Sheng

Rosa T. Sheng’s convocation address to the Class of 2018 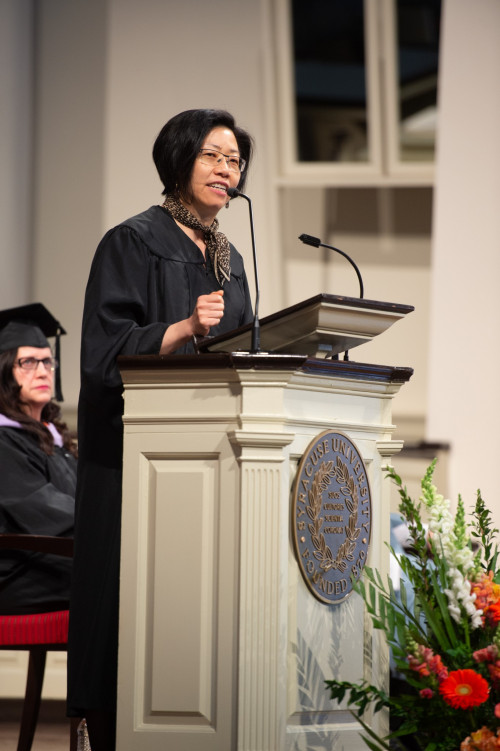 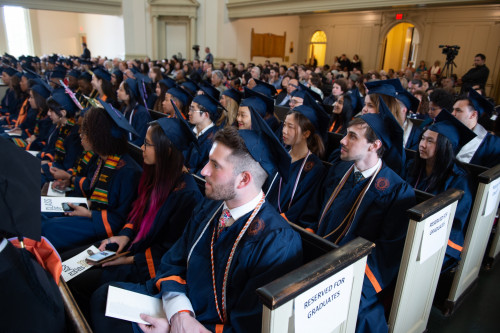 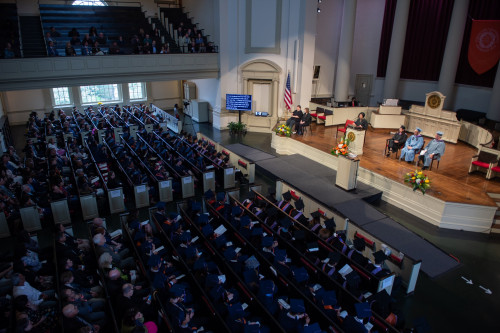 Thank you to the Syracuse University School of Architecture and in particular Dean Speaks for the invitation to join you today. It is my honor and privilege to be here with you on this amazing day.

Today is the first day of the rest of your life!

So, are you super excited or freaking out?

Ok, If I were you, I would be freaking out… You are probably sleep deprived, over your head in student loans and wondering how long you can camp out at home before your parents give you the gentle nudge to spread your wings and fly little birdie.

Okay, that was my attempt at a humorous opener inspired by Ellen DeGeneres. And there is definitely a reason why I am on architect and not a comedian.

In all seriousness though, I am here as your official ambassador from the future of Architecture to tell you everything is going to be okay. So listen carefully, do exactly what I say.

I knew that I wanted to be an architect the first time I visited my grandparents in China, at the ripe old age of 11. Before that I grew up thinking that architecture was malls and suburban tract homes. During that summer, as we visited the architectural wonders of the Forbidden City and the Great Wall, my grandfather revealed to me that architecture isn’t about the buildings so much as its about the people and their experiences in and around and outside them. — Architecture is meant to last beyond one person’s lifetime. Architecture is time capsule for humanity, capturing the memory and history of an entire culture / civilization preserved in time. That was what he explained as Profound Impact. At that moment, I knew that I wanted to have PROFOUND IMPACT.

When I had this A-HA moment, I was so excited that I started telling my whole extended family. One of my uncles joked, “Why would you want to do that? They work long hours, and don’t make much money. Besides, aren’t you going to get married eventually and have kids? So, what’s the point? I was furious and even more determined to prove him wrong.

I was accepted into the Syracuse University in 1989 and had an amazing experience during my 5 years. The highlight of it was the Florence program. I thought I was on the path to becoming a famous architect to fulfill my self-proclaimed prophecy of profound impact. When I graduated during a recession of 1994, I was lucky to get a job that paid less in salary than my annual tuition. My projects consisted of designing malls and drawing bathroom details. There was a disconnect between what I thought I’d be doing vs. what I was actually doing – the small menial tasks. I asked myself: “Am I in the right profession? Did I make the right choice?” I contemplated if I should cut my losses and leave architecture to do something else. But I was reminded of the conversation with my uncle, thinking what if he were right after all? I doubled down and became more determined to seek profound impact in my career.

2. Don’t be afraid to ask to stupid questions or “suggest” the stupid solution

Well, as serendipity would have it, I confided to a close friend and fellow Class of ’94 architecture alumnae who worked at Bohlin Cywinski Jackson in Pittsburgh, PA. She encouraged me to apply for a job there explaining there were many interesting projects including one with Pixar Animation Studios. Well I got hired and fortunate to be on the team that designed Pixar’s headquarters in Emeryville, Ca in its very early stages. We have the privilege to interact with Steve Jobs before he went back to Apple. While project design was going well, but we weren’t progressing fast enough to meet the client’s needs. At the time, we were based in Pittsburgh, flying back and forth every 3 weeks. When the Director of Facilities asked our team how we could solve the schedule challenge, I was brave enough to suggest they should move us out to California for the project to speed things up. Everyone on my team laughed and said it was a crazy idea, but the director of facilities said it was a great idea. So 3 months later, they moved us out to California and we not only finished the project on time, but the group that moved out remained to form what would later be known as the San Francisco Office of Bohlin Cywinski Jackson, currently employing 60 people. I was really glad that I had suggested the “stupid” solution.

Shortly after Pixar was completed, I was fortunate to continue to work with Steve on Apple’s high-profile retail stores. At that time, they only had 6 % market share, only sold through distributors and the only stand-alone computer store was Compaq. Steve wanted to create a unique retail store experience, designing an all glass structural staircase without steel supports that had never been done before. There were many doubters at the time. But Steve encouraged us to suspend disbelief and challenge what’s possible. I worked on the original Apple store, in New York City’s SoHo, and it was an amazing project. So we put on our reality distortion lenses during the research and development of the staircase. Prototyping, literal glass breaking, tweaking and rebuilding again and again up until a few weeks before the store opening. Well, we succeeded in designing and engineering what had initially seamed to be impossible, by the encouragement of one of the greatest visionaries of our time. We even applied for and received a patent for our glass staircase design.

4. Find Your Champions, Be a Champion (Because we ARE the Champions, of the world)

I worked on five or six Apple stores after that. Until that point, I hadn’t believed there was sexism or inequity in the field, but that changed after I got married and had my first child.

When I worked on the 5th Avenue Apple store, it was more apparent than not there were times sexism came out. The head landlord representative made a comment about my pregnancy, and it was uncomfortable but I kept working on the project and I found champions — Steve Jobs was one of my greatest champions.

After the birth of my daughter, I visited the cube store for its grand opening. Steve Jobs asked me to go to dinner with him and the cube team, but I couldn’t bring my family so I graciously declined. I thought I had given up the chance of a lifetime. Who turns down a dinner with Steve Jobs? But then he asked me a second time and said I could bring my husband if I got a babysitter. I was struggling with, well, I could try and find somebody to take care of my baby last minute in NYC, but I don’t want to, I want to be with her and I want to be with my family, so I declined again. I was kicking myself, who turns down Steve Jobs twice? But at the end of the day with the sea of opening day crowds in the store, Steve comes through it parting the Red Sea like Moses, to me and said this, “All right, you drive a hard bargain, the kid can come, but if she poops, pees or cries, she is out.” Well, we said yes, and my daughter was the most popular dinner guest that evening and on her best behavior. Steve said at the end of the night “your kid is pretty cool, she can come anytime.” The lesson learned here is that we need champions to advocate for us. In this case, one of the greatest visionaries of the world, of our time, had the sight to see my value when I was blind to my own value – literally inviting me 3 times to have a seat at the table.

5. Fail Fast, Fail Often, but Don’t Quit. You can fail in the moment and not be a failure for life.

The biggest lesson that I can impart on you is to embrace failure. Somehow, we are taught not to share our failures for fear of looking weak, inferior, incompetent. In fact it’s not the failure itself that determines our character, but how we react, what we learn, and how we recover to try again that charts the path to your future. Looking back, my greatest successes have relied on multiple failures with the grit and determination to persevere.

There was a point in my career during the recession where I was questioning whether I should stay in the profession because I had a second child, and I didn’t know it at the time, but was experiencing post partem depression. I felt like a failure, struggling to be good architect and a good parent. I was depressed about not being able to do either well, frustrated that my career turned from having an incredible design trajectory to a world full of compromises and expectations that I would do it all. The profession was not culturally set up to support that dichotomy of the Archimom (architects who are mothers). I was considering quitting and leaving architecture, blind in a sea of self-pity and despair.

Instead of quitting, I had a good mentor who encouraged me not to quit and was my beacon of light during that critical time. Soon after she invited me to be part of a panel she was running for The Missing 32% Symposium. The name of this group was based off a statistic of the attrition of women in architecture from graduation to licensure. The statistics were even more dire for representation of people of color. After our group presented there was so much energy, so we started a committee. We wanted a way to prove things were happening in gender equity, beyond just anecdotes. We found there was no research on the topic, so we started a research study, the Equity in Architecture Survey, in 2014 that got 2,280 responses. The national survey with men and women sparked a conversation and the key findings talked about what career pinch point factors cause people to leave architecture. From that, we presented the information all over the U.S. and internationally as a global discussion. To date, we have completed 3 surveys with the last one resulting in nearly 15,000 responses. The resources will be available to all of you to help you navigate the potential career pinch points or challenges you could face in your professional development journey.

As Dean Speaks had mentioned, I attained my Fellowship with the AIA this year. Quite frankly, the process was like doing a Thesis all over again! What you don’t see if the failure, leading up to the success. I had applied two years before and been rejected. It took me quite awhile to heal my bruised ego and stubborn strategy to see that I needed to change and grow in the process. I had many champions who encouraged me to apply again. I am thankful for my family’s patience as I subjected them to the Odyssey of my determination. In the end, what my supporters said was true – it was never a matter of IF, but rather a matter of WHEN.

So, embrace failure, make it part of your daily mantra to explore and learn from each failure to get to you’re A’HA moment of discovery and victory.

Remember, Today is the First Day of the Rest of Your Life…

What will you do to have Profound Impact and Change the World?