Best Interstate 81 option: A grid for everyone (Commentary)

Traffic waits along Almond Street beneath Interstate 81. The debate over its replacement pits Syracuse and its suburbs against each other – but doesn’t have to.

Special to syracuse.com by Lawrence Davis, a registered architect, is undergraduate chair and associate professor of architecture at the Syracuse University School of Architecture. 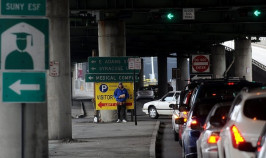 Photo by Dennis Nett (dnett@syracuse.com)“The quality of each matters, not just in our personal lives but for the entire region, an economic and cultural unit that must compete in a global economy,” writes Lawrence C. Davis of the Syracuse University School of Architecture.

The discussion on the future Interstate 81 in downtown Syracuse is now over a decade old. This debate was the topic of a March 22 Syracuse University Symposium organized by the Maxwell School of Citizenship and Public Affairs and the School of Architecture. As most know, there are three options for a new I-81: rebuild the viaduct (albeit a bit wider and safer), replace it with the on-grade “grid” or build a tunnel under the new urban grid to keep traffic flowing through downtown. The battle lines are predictable in this debate. People in the city want to reconnect neighborhoods severed by the existing viaduct, so they argue to take it down. People who commute from the suburbs want to maximize convenience and want to keep it up. There is a compromise – to build a tunnel – but it is vastly more expensive to build and maintain. As endless and frustrating as this debate seems to be, one symposium speaker, Alex Krieger, a Harvard professor and urban designer who worked on Boston’s “Big Dig” that buried I-95 in its downtown, notes that Syracuse is not unique. Similar struggles with urban infrastructure are playing out in other cities facing the same challenge, as their downtown highways reach the end of their designed life cycles. In most cases, those supporting the center cities see this obsolescence as a once-in-a-lifetime chance to improve their quality of their urban life.

The symposium speakers and audience seemed to be largely in favor of the grid, a solution that, if the presentation of Maxwell Assistant Professor Jonnell Robinson is correct, will cost roughly the same as the viaduct. She also noted that keeping a raised highway results in the demolition of a few more buildings and thus would cost the city more in prospective property tax income. Connected to this, but not discussed directly, was the new grid’s ability to not only bond downtown with the SU Hill, but also be part of a larger, more intricate strategy that attracts new investment to the hospitals, university and the Center of Excellence for Environmental and Energy Systems. All are potential engines of positive growth that will enhance direct and indirect employment and cultural value for the entire region.

As informative as the event was, missing was a strong advocate of the suburban perspective, a position I hear about anecdotally, and frequently, from my colleagues who daily travel back and forth from the urban perimeter. Surely, with the grid there will be more commute time for suburban residents. The estimates of such increase range from 2 to 20 minutes, depending on with whom you talk.

Another point of friction between the city and its suburbs caused by the grid is that some of the vehicular congestion, noise and pollution currently occurring in the center of Syracuse would be displaced to the perimeter along the Interstate 481 bypass. These are legitimate concerns that need more consideration, but can be addressed.

Perhaps the biggest impediment to a solution for the I-81 question is the contentious nature of the debate itself between the center and edges of our metropolitan area. In fact, the public deliberation is so tricky that for key politicians, mainly in Albany but some locally, it seems the main strategy is to delay and not make a decision on the matter anytime soon. For them it’s just too risky.

I know of very few people who conduct their entire lives in one jurisdiction, much less one neighborhood. We live, work, consume and recreate in a network of places. The quality of each matters, not just in our personal lives but for the entire region, an economic and cultural unit that must compete in a global economy. The well-being of our regional metabolism and the variety of well-developed and socially healthy neighborhoods we offer to the world allow us to attract the best talent and investment to Central New York.

The improvement of a particular place, such as downtown and its connection to the SU Hill and hospitals, is in the best interest of both the city and the suburbs. We should enhance the grid and the strong connections it makes between us, not through us. This will raise up the entire region.

Sure, the commute times will increase slightly, the aggravation of construction will take years, but in the end, we as a region, will collectively invest in our shared competitiveness and the quality of our daily lives.

View the entire symposium: “Future Infrastructures: The Over and Under of I81”